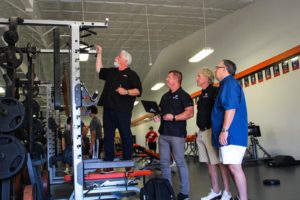 Having spent the past quarter of a century inspiring student-athletes to discover the wonders of the world through sports, Global Football president and founder Patrick Steenberge is now working to make it safe for them to return to the field of play.

The onset of Covid-19 brought a pause to Global Football celebrating 25 years of having provided 17,000 amateur football players, coaches and families from more than 370 schools the opportunity to travel and compete internationally. During this enforced break from overseas travel, Patrick Steenberge has partnered with the leadership team of Alpha Defense Shield to assist college and high school athletics programs and schools in returning to normal in the United States. 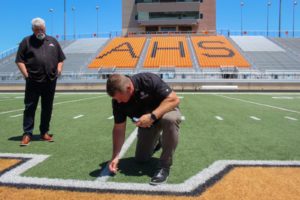 Calling on trusted contacts throughout the world of sports, Steenberge has enabled multiple demonstration tests of Alpha Defense Shield to be performed in recent weeks at the U.S. Naval Academy, Arizona State University and the University of Texas at San Antonio. Alpha Defense Shield has been proven effective during the past decade through 150 tests over the past decade.

Following the testing demo, ADS spray-treated the Bearcats’ weight room with Surface Shield, allowing the student athletes to enter and train without fear of pathogens being on the equipment for the next month. In addition, Alpha Defense Shield was invited to spray-treat the weight room of nearby All Saints Episcopal School, a traditional TAPPS powerhouse. University of Oklahoma Director of Sports Performance Bennie Wiley is now using Alpha Defense Shield in the Sooners’ weight room. 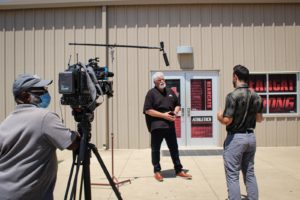 “A huge thanks and congratulations to Aledo High School and their visionary administrators and coaches, as through the assistance of Kurt Smith, President of PBS of Texas, this is being made possible,” said Steenberge. “Glenn Smith, a former Dallas Cowboys coach, also helped arrange for WFAA-TV 8, the DFW ABC affiliate, to produce an informative story from Aledo that aired on its highly rated sports show that same evening. It is time to start playing sports again, safely and protected.”

Kurt Smith oversees a technical cleaning company that has provided specialized services since 1989, whose client list includes the State Capitol of Texas in Austin, Alcon, Aledo ISD, All Saints Episcopal School and numerous other educational, medical and municipal facilities across Texas and in other states.

David Nolan, CEO – Noted entrepreneur and businessman who took Hill Country Bakery from one small restaurant to serving Starbucks USA as the primary bakery goods vendor. David currently owns a San Antonio boutique with his wife, operates a successful trade school, and is continuing to develop the Alpha Warrior Fitness platform based at Retama Park San Antonio, with facilities on more than 120 military installations.

Command Sgt. Major Mike Hatfield (ret), Partner – An esteemed 30-year Army career took Sgt Major Hatfield to commands all around the globe, including leading the search for weapons of mass destruction in the Middle East, to a multitude of war zone deployments, and to developing a revolutionary fitness program for the Army as directed by current Chairman of the Joint Chiefs of Staff, General Mark A. Milley. 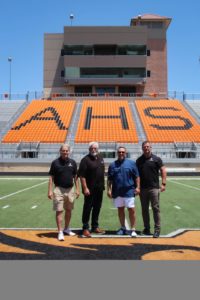 General Bradley Spacy (ret) – Recently retired 2-star general who served our country for 32 years who has moved to San Antonio to join this unique team. Gen. Spacy deployed the world over and enjoyed seven command leadership positions, including oversight of all Air Force personnel and installations across Europe and Africa.

Patrick Steenberge Sports & Schools Director; founder and president of Global Football, which since 1996 has been the world leader in international educational sports travel, having taken teams to 28 countries on 6 continents. Partners include: AFCA, NFL, Super Bowl Host Committees, USA Football and federations around the world. Patrick was a quarterback for Ara Parseghian at Notre Dame, with his first visit to Texas being to play vs. U Texas in the 1971 Cotton Bowl.

About Global Football: Since 1996 Global Football has provided 17,000 amateur football players, coaches, families and fans from more than 370 schools the opportunity to travel and compete internationally with similar people of differing cultures. During that time, they have produced games and tours in 28 countries on 6 continents, including 2012, 2014 and 2016 college and high school showcases staged in Ireland alongside major NCAA college football games in Dublin. Through these games, clinics and tours the people involved experience and learn about unique lands, fascinating people, and the sports environment in different parts of the world. During the past 24 years, Global Football has become the world’s largest exporter and producer of American football outside of the USA. The Global Football Foundation, a 501(c)(3) non-profit, was formed to further our commitment to these goals.