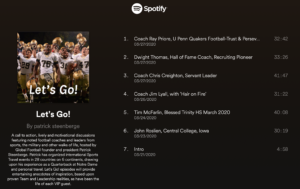 Let’s Go! That’s the title of the rapidly growing podcast available through Spotify and other platforms featuring Global Football founder and president Patrick Steenberge talking Leadership, Motivation and Commitment to Excellence with entertaining leaders from a range of disciplines. Each of these VIP guests is highly successful and recognized in their particular field of athletics, military, business or education, and through their unique relationship with Patrick, is happy to share personal stories that will hit home with every listener. These leaders live a life of clarity and decisiveness, and are eager to share the How and Why.

Each half-hour episode features individuals who will entertain listeners with anecdotes about their personal journeys, their own challenges, their wins and losses, their teams and their travels. Everyone who gets to know the friends Patrick and Global Football have made during the past 25 years of exploring the world through these spirited discussions will then be more eager to face their own daily challenges and be more fired up to Lead and to be a superior Teammate. This is a podcast about how you the listener can truly impact your own life, and the world. Search for ‘Patrick Steenberge’ on Spotify to start listening today. Let’s Go!

“My life thus far has been full of a wide array of experiences and personal interactions with powerful leaders who are simply great folks,” explained Steenberge. “The fun part for me is that through my work, my passion for travel, sports and sharing with others, I’ve been able to get to some fabulous places around the globe with so many fascinating individuals.

“Now, these highly accomplished yet humble mentors are happily sharing their journeys and their passion. Everything of worth that I’ve been able to accomplish in my life thus has been due in large part to the team members with whom I’ve had the chance to work, to explore, to compete and to enjoy. I’ve also been extremely blessed over the decades to have been led and inspired by passionate mentors, by coaches and teachers who exhibit and share their unwavering commitment to success.

“I believe that now, more than ever, we are in need of superior leaders and selfless team members who are willing to serve our fellow men and women, to live each day with great passion, to overcome adversity and to motivate others to do the same. And to do it with a sense of joy and gratitude.”

Highlighting the ongoing series of episodes are seven guests who exemplify leadership, motivation, success and teamwork: 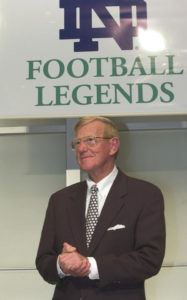 • Lou Holtz, (pictured, right) legendary collegiate football coach whose 1988 Notre Dame team won the National Championship, a highpoint of Lou’s coaching career that spanned 4 decades, leading him to ESPN and ABC as a broadcaster, and to be one of America’s most in-demand public speakers.  He led a Notre Dame Legends team to Japan in 2009 for the Global Football-produced Notre Dame-Japan Bowl in Tokyo.

• Susan Morrice, Irish-born and educated geologist, explorer and entrepreneur who demonstrated the tenacity and belief to discover oil and gas in Belize, and now is Founder and CEO of Belize Oil & Gas, a company that is reinvigorating an entire nation through her leadership.

• Chris Creighton, head coach football of Eastern Michigan University, who has resurrected the Eagles program, taking them to 3 Bowl games. Chris took his Drake University Bulldogs to Tanzania to play the first-ever game of college football on the African continent and climb Mount Kilimanjaro in 2011. Patrick refers to Coach Creighton as, “the best man in college football today”.

• Tommy Tuberville,  2008 AFCA Coach of the Year, leading his Auburn Tigers to a 13-0 season, another brilliant addition to his coaching resume. Tommy has deep respect for America’s military, has traveled twice downrange to thank those in harm’s way, and is now working to serve as US Senator from the state of Alabama.

• Gen. Bradley Spacy (ret.), whose 20+ years of service in the Air Force demonstrated highly effective leadership in the 19 nations in which he served our country, leading him to the rank of 2 Star General, along with the respect of everyone who worked alongside him. Now Brad is focused on developing a highly competitive and functional form of physical training. 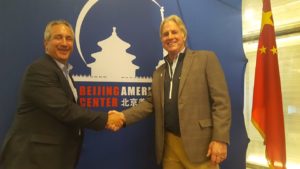 •  Ray Priore, (pictured, left) University of Pennsylvania head football coach, a two-time Ivy League champion whose Quakers were the first Ivy League school to play football in China during a visit to Beijing and Shanghai in 2019, the Penn-China Global Ambassadors Bowl produced by Global Football.

So, if you’re one of those people who simply refuses to settle for mediocrity and is willing and eager to help those with whom you play, compete, work or live – your teammates, your family member or office associate – then this podcast should become a regular staple of your weekly schedule.

If interested in scheduling Patrick Steenberge for a Global Guy Training session for your students, employees, managers or team of any type, either in-person or via video conference, contact him directly: patrick@globalfootball.com  817.219.7274. These sessions can be done in English or Spanish, and focus on the topics most timely to your current issues and goals. Patrick’s philosophy and methodology is driven by two key factors that have impacted him so powerfully:  “We have No Breaking Point”, as Coach Ara Parseghian so powerfully directed to Patrick and his Notre Dame teammates; and “Tupande Kileleni”, Swahili for “Let’s Climb to the Summit Together”, the motto of the 2011 Global Kilimanjaro Bowl which Patrick produced.