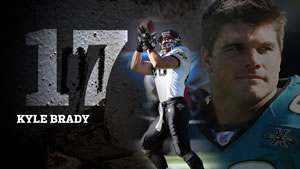 The star of 13 seasons in the National Football League will perform the coin toss at University College Dublin on Friday, August 29, before his alma mater Cedar Cliff High School takes on Pennsylvanian rival Penn Manor at 7pm under Dublin Friday Night Lights. The teams last met in the first round of the 2013 Pennsylvania State High School playoffs, when Penn Manor rallied from 21 points down to narrowly win 35-34.

Brady, who was the ninth overall selection in the 1995 NFL Draft and starred as a tight end during his college career at Penn State, will also attend the Croke Park Classic, when his Nittany Lions meet the University of Central Florida the following day. He will feature as the keynote speaker at the Price Waterhouse Coopers Croke Park Classic dinner on the evening of Thursday, August 28.

“I am honored to have been selected as Honorary Chairman for the GIFT event, and this visit will be very special on many fronts for me,” said Brady. “Two of my alma maters will be playing over in Ireland, so I’m very much looking forward to seeing them play and am excited for the young guys. It is such a great opportunity for them to experience another culture and a different way of life that comes with that and to meet the people of Ireland.

“I am a first generation American, and in the last six or seven years I’ve connected with my family in Ireland and plan on reaching out to them to see if they will meet me and visit Mayo and Galway counties, where my ancestors are from.

“This is really my first exposure to Croke Park and the GAA and I’m looking forward to getting to meet and know some of the people who have a passion for sports in Ireland. It will be great for the visiting players and fans of both teams and for the Irish public to experience some good classy people and games of American football.”

“As we bring two top high school teams from Pennsylvania, the state where I grew up and played high school ball, to Dublin to compete and showcase their talents, we are very fortunate to have Kyle Brady join us as Honorary Chairman,” said Global Football President Patrick Steenberge.

“He is a first class guy who has been successful in every stage of his playing and post-football career, which includes him earning his law degree. The fact that he graduated from Cedar Cliff High School certainly adds a huge element to their participation in the GIFT 2014 event.”

Brady has already underlined his support for the GIFT game having appeared at a ‘Colts In Ireland’ Cedar Cliff fundraising event which continue at http://www.coltsinireland.com.

The GIFT 2014 event is being played in partnership with the Croke Park Classic and the Gaelic Athletic Association (GAA). The NCAA college football clash between the Penn State Nittany Lions and University of Central Florida Knights, competing for the inaugural Ambassador Dan Rooney Trophy, kicks off in the legendary Croke Park Stadium on Saturday, August 30, with tickets and travel packages available from http://www.crokepark.ie/crokeparkclassic/booknow.aspx.