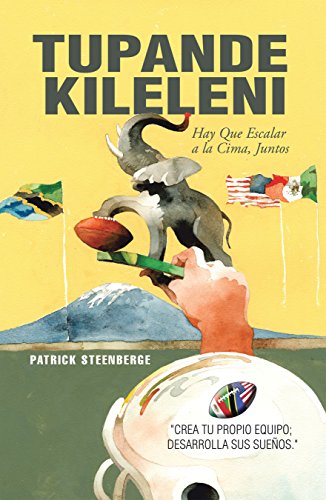 A book telling the inspiring story of how determined individuals from Mexico, the United States and Africa came together as one team to play the first-ever game of American Football on the African continent is now available in Spanish language for the first time.

‘Tupande Kileleni: Let’s Climb to the Summit Together’ tells the unique story of the 2011 Global Kilimanjaro Bowl from the viewpoint of event producer Patrick Steenberge, founder and president of Global Football, as he took a seemingly impossible dream and created a life-changing experience. The CONADEIP All-Stars, a team selected from Mexico’s private universities, played against Drake University from Iowa, as they introduced the sport of American Football to the excited and curious people of Tanzania.

The Spanish language version of Tupande Kileleni can now be purchased online from the world’s number one online retailer Amazon.com and at Barnes & Noble in paperback, hardback or Kindle format, published by Xlibris. A revised English publication of the book is also available in the same formats.

“This story should inspire everyone who reads it to dream, believe, persevere and work in cooperation with others,” said Steenberge. “This is a story of adventure and it focuses on setting and achieving lofty goals, of achieving what many said was impossible, through the commitment and team efforts of men and women from three different parts of the world.

“I hope this story will inspire readers to believe that they too can achieve anything, if they commit, work with a motivated team of leaders and realize that they have no breaking point especially if God’s hand is leading them.”

Student-athletes from Drake University and the CONADEIP universities met on the gridiron as opponents before an eager crowd of 12,000 intrigued Tanzanians, key political leaders and a worldwide TV audience. Then they bonded as teammates while serving the local community before climbing the iconic Mount Kilimanjaro as 134 people stood as one team on the rooftop of Africa.

The key person from Mexico who sensed the vision of this memorable experience, and boldly led the effort to unite the CONADEIP Universities in this mission was Dr. Enrique Ramos, Director of Student Affairs for the Tec de Monterrey system. He quickly gained the powerful support of Dr. Carlos Mijares, and together they convinced over a dozen campuses to join in this endeavor.

According to Dr. Ramos: “There are a myriad of stories and anecdotes that all of us who participated in this life changing experience share. Beyond that however, the ‘Kili Bowl’ has also brought about personal, and professional reflections that without a doubt have contributed to making us better persons who acknowledge how fortunate we were to have taken part in this incredible journey.”