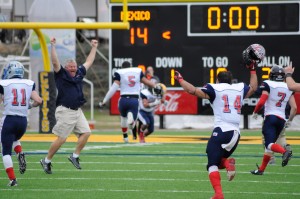 The Tazón De Estrellas (Bowl of the Stars) is an annual end of season game, featuring a Global Football-organized squad of select NCAA Division III student-athletes, which was played for the 20th time in Mexico in December 2017.

The game between America’s Team Stars & Stripes and the CONADEIP All-Stars from Mexico’s private universities features a week-long event of team practices, community service and the game in front of a large and enthusiastic crowd.