Global Football President Patrick Steenberge was among the officials invited to take part in the U.S. launch this past weekend of the Croke Park Classic between Penn State and UCF.

The weekend’s activities included a press conference, facilities tours, hospitality sessions, numerous events and meetings, and the game played Saturday night between the Nittany Lions and UCF at Beaver Stadium.

The events kicked off the build up to the first international contest for both college teams, which will take place on August 30, 2014 at Croke Park, the headquarters of the GAA, in central Dublin.

Steenberge noted, “It was very special to be involved in this past weekend’s events and planning sessions at Penn State, and to see this project continue to take shape. It has been just over a year since this concept was initiated, and in less than one year from now we will all gather in Dublin for this historic event. The momentum is growing on both sides of the Atlantic!” 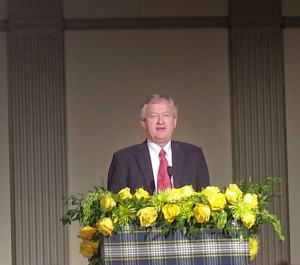 In preparation for the Croke Park Classic, the delegates had an opportunity to meet with a variety of Penn State staff, visit Beaver Stadium and football facilities to continue working on logistics for the game. 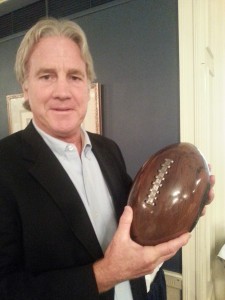 The winning team in the Croke Park Classic will earn the Dan Rooney Trophy, which was on display before Saturday’s game. The Dan Rooney Trophy is a replica football made of bog yew and Pittsburgh steel. The yew comes from what remains of forests that grew 4,200 years ago and lie deep in the Irish midlands. The steel is from Three Rivers Stadium, the former home of the NFL’s Pittsburgh Steelers. It is sure to be a treasured trophy for the victorious team.

Capacity at Croke Park will be 69,000 for the contest. The GAA has approximately 700,000 members worldwide, with Croke Park hosting the annual All-Ireland Finals of Hurling and Gaelic Football every September. 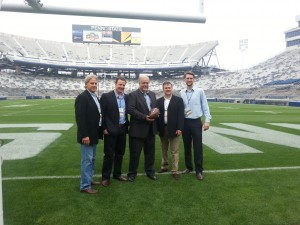 The Penn State-UCF 2014 game will be the eighth American college football game held in Ireland. The last American football game hosted in Croke Park was in 1996 when Notre Dame played Navy. The Irish and Mids played in Dublin’s Aviva Stadium to open the 2012 season.