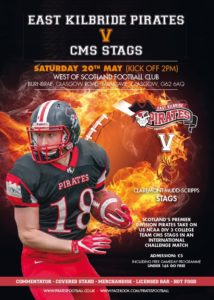 While in Ireland, the Stags visited the spectacular Cliffs of Moher, Galway, the capital city Dublin, Croke Park and the Gaelic Athletic Association Museum, and the Guinness Storehouse.  They took the Superfast Ferry from Belfast in Northern Ireland to Scotland visited both Glasgow and Edinburgh, seeing the William Wallace Monument, Stirling Castle and Edinburgh Castle.

The CMS Stags beat Scottish club team the East Kilbride Pirates 73-6 during a fantastic afternoon of football, which was a great learning experience for the hosts.

The Stags led 32-0 after the first quarter then after a series of big gains on passing plays, Geno Quaid ran the ball into end zone for another six points.  Victor Bunch picked off a Neil Baptie pass for a touchdown, then Quaid scampered down the sideline for another score before the Pirates put points on the board before halftime.

Baptie connected with Stephen McCluskey for a first down with 1.16 left in the first half then kept the ball to rush into the end zone for the persistent hosts.  Brenden Brown scored the final two Stags touchdowns to complete the scoring.

“This game is one of the highlights of our season,” said Pirates coach Ross Templeton.  “The chance to test ourselves against a team from the U.S. is a great challenge, and allows our team gain a lot of experience and take a step forward in our play.”