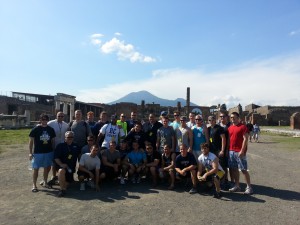 One of the highlights of organizing overseas visits for U.S. high schools and colleges is the friendships and partnerships that Global Football establishes with teams and American football organizations around the world.

The architects of this Sunday’s Roma Bowl and the members of the host Legio Roma XIII are a perfect example of a European club team that is eager to develop its players and talent level by welcoming American opposition to line up against on the gridiron.

Playing against NCAA D-III athletes and a team of the caliber of Elmhurst College is not only a thrill for Legio Roma XIII under joint head coaches Fabio Annoscia and Marco Bozzarini, but also an opportunity to test their abilities and make friends along the way.

“It has been wonderful to work with the Legio XIII team again, as they do such a fantastic job in preparing for this event,” said Global Football President Patrick Steenberge.  “I am confident the game day experience will be something very special for the Elmhurst team.  They had a memorable experience in Greece and are now in Italy for a bit of touring and then the football game.  Our thanks go out to all who are making this possible.”

Sunday’s game will be attended by a number of political officials, a representative of the U.S. Embassy and invited celebrities from the world of show business and sports.  The band of the Carabineri will perform the national anthems.

The Bluejays took in the sights of Athens earlier this week before boarding a cruise to the Ancient Roman city of Pompeii, and will join the Legio team for a joint practice before facing each other on Sunday, June 9 at the Stadio Comunale di Fonte Nuova, kickoff 5pm local time (11am EST).