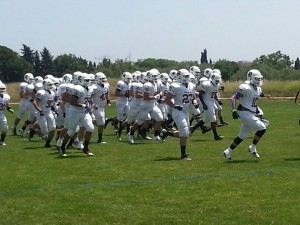 The Americans led 2-0 early in the game through a safety after Zach Erba blocked a punt then quarterback Brian Soller scored on a 9-yard run and Matt Angel tagged on the extra point to earn a 9-0 advantage. The lead stretched to 16 points by the end of the first quarter as Austin Swenson hit Jordan Patterson for a 12-yard touchdown after a Kyle Brewer fumble recovery

Two third quarter scores saw Chin return another interception for a touchdown, this time from 38 yards out, and Close forced his way into the end zone from three yards out. With Clark Schultz making both extra points, the Fightin’ Engineers led 58-0 heading into the fourth quarter.

Ryan Landwehr broke the plain on a one-yard run and Angel split the uprights, then Jacob Sexton dashed from midfield for a 50-yard scoring run and Schultz put the final point on the board with the PAT.

“The game was a great experience for all concerned and there were smiling faces on the players of both teams afterwards,” said Global Football President Patrick Steenberge. “I am grateful to Bart Iaccarino for coaching the Spanish all-star team and to the Reus Imperials for hosting the game. The home players enjoyed the opportunity to line up against an American team that won a championship last year, and for Rose-Hulman this was a positive preparation for the new season and a wonderful visit to Barcelona and the surrounding region.”