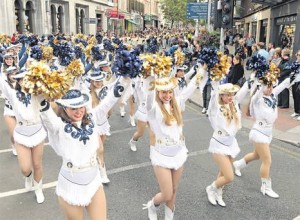 ‘Led by a bagpiper in a blue tartan kilt, a sea of footballers in uniform and bubbly cheerleaders marched to the ear-splitting beat of a bass drum.’

That was how the Irish Independent described the Thursday evening that Dublin city center was brought to a standstill by some two thousand participants of GIFT 2012, marching from St Stephen’s Green via Kildare Street to Trinity College in a spectacular parade.

‘They converged in front of the famed Campanile monument to whip up the masses ahead of today’s historic clash between nine American and two Canadian high school football teams. It’s the first time that these high school football teams have played each other on foreign soil. And even the rainclouds didn’t dampen the enthusiasm of the players and their supporters as they paraded from St Stephen’s Green.’

The combination of 35,000 North Americans visiting Ireland ahead of the Emerald Isle Classic being played two days later between Notre Dame and Navy, and inquisitive locals eager to watch the marching bands, cheerleaders and high school athletes marching through the streets, truly gridlocked the streets of the busy city at rush hour.

Global Football President Patrick Steenberge and representatives of the schools and colleges taking part in GIFT 2012 had been guests of Lord Major of Dublin Naoise Ó Muirí before the parade, and all met at St Stephens Green to march on Trinity College.

The evening before they were to play the first game of a new season at Donnybrook Stadium, Parnell Park and Páirc Tailteann, the American visitors, led by Honorary Chairman and former Green Bay Packers star Mike McCoy, then congregated at Front Square at Trinity College for a Pep Rally.

After a VIP Welcome by  Trinity College Senior Lecturer Patrick Geoghegan, the assembled masses were greeted by Canadian Ambassador  Loyola Hearn, US Embassy Public Affairs Officer Susan Cleary, Tourism Ireland CEO Niall Gibbons, and Brian Mullins, the legendary Gaelic Footballer who played with St Vincent’s and the Dublin Senior Team for 11 years and is now the Director of Sport at University College Dublin.

And then it was off to a final night of rest before the GIFT 2012 game day.