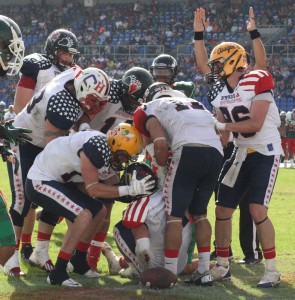 There is no event or personal experience that can rival the Tazón de Estrellas (Bowl of the Stars) produced exclusively for NCAA Division III student-athletes eager to travel to face the best college football all-stars from across Mexico, and to enjoy a full week in Mexico.

For the sixth year in succession and for the 17th time since Global Football first took standout football players south of the border in the original Aztec Bowl, a NCAA Division III all-star roster, known collectively as Team Stars & Stripes will take on the CONADEIP All-Stars in the Tazón de Estrellas in Mexico on December 20.

“It is something you will always remember, so definitely, if you get the opportunity, take part in it,” advised Buffalo Bills running back Fred Jackson of his 2002 experience when he was the game’s MVP. “We played against the national champion team mixed with other all-star players. It was a really good team. I remember how crazy the crowd was and the great team camaraderie.”

Team Stars & Stripes will again be led by head coach Don De Waard, defensive coordinator at Central College (Iowa). The Americans will spend seven days in the colonial city of Puebla and will face the premier players from across the nation from the CONADEIP Conference at El Tempo Del Dolor (Temple of Doom Stadium) at Universidad De Las Americas Puebla (UDLAP). American Eric Fisher, who won the 2010 CONADEIP championship with UDLAP and led the hosts to a 45-27 win over Team Stars & Stripes in 2011, returns to coach the Mexican all-stars.

An ‘Aztec Bowl’ game being offered to college players of any ability does not provide the same level of personal experiences off the field, a full week of practices, or the same quality of opposition, instead playing against a lower level Mexican all-star team. Within its history the 1997-2007 Aztec Bowl games were organized by Global Football, in partnership with the Mexican Universities League. Since 2009 the Mexico CONADEIP Conference has been the working partner with Global Football for the annual Tazón de Estrellas, and was also the partner for the 2011 Global Kilimanjaro Bowl in Tanzania.

With this being the last time many of the graduating seniors will pull on their helmet and pads, the Tazón de Estrellas offers them a true final football experience, with no special all-star rules in place.

The players and coaches will travel to Mexico for seven days, with two-a-day practices and an opportunity to explore the local region and experience a different culture. The visit also focuses on community service projects, with previous initiatives including clearing an area of land to benefit an impoverished neighborhood, creating a play area for children, and holding a football clinic for local youngsters.

The Tazón de Estrellas and its forerunner the Aztec Bowl have produced a series of exciting games and established a fierce but friendly rivalry between the Americans and Mexicans. The hosts won 24-12 in 2009 before Team Stars & Stripes leveled the series with a 48-7 victory in Toluca in 2010 and the CONADEIP All-Stars won by a margin of 45-27 in 2011. It was the turn of the Americans to triumph 32-15 in 2012 on the head-coaching debut of De Waard, and a 29-7 win in 2013 established a 3-2 series lead.