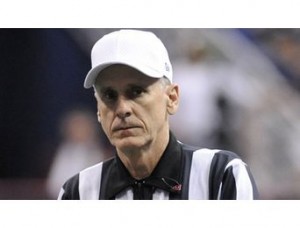 Veteran official Bill LeMonnier will again take charge of the Tazón de Estrellas (Bowl of the Stars) when Team Stars & Stripes clash with the CONADEIP All-Stars in Monterrey on December 21.

The traveling American Division III all-star team will face the Mexican hosts at the 36,000-capacity Estadio Tecnológico on the Tec de Monterrey campus on Saturday, December 21 at 1pm CT.

In addition to the Tazón de Estrellas, LeMonnier has officiated at several Global Football events, including the Global Kilimanjaro Bowl played in Tanzania in 2010, two Global Challenge Bowl games in Tokyo, and games played in Australia, Panama and Europe.

LeMonnier officiated the 2011 BCS National Championship Game between Auburn and Oregon.  In 20 seasons with the Big 10 Conference, he has been honored with 16 Bowl assignments, including the Fiesta Bowl, Orange Bowl, Cotton Bowl, Holiday Bowl, Pigskin Classic, Texas Bowl, GMAC Bowl and Independence Bowl.  He has worked eight seasons in the Arena Football League, serving as the referee for Arena Bowl XVII, and also worked the 2007 and 2011 IFAF World Championships played in Japan and Austria respectively.

“I am honored to have been asked to officiate this game again and bring together a fine group of officials who will benefit from the experience in Mexico both on and off the field,” said LeMonnier.  “This is an interesting game to referee because it includes several elements you don’t find in many all-star games.  The American players are taking the field for the last time in most cases and there is a passionate rivalry between the two countries, which makes for a very competitive game.”

Working alongside LeMonnier will be Mario Matos from Mexico, who has also officiated previously at the Tazón de Estrellas and the Global Kilimanjaro Bowl and fellow Mexican officials Edmundo Rubio and Sergio Avila.  They will be joined by Alex Barinaga from the Gulf South Conference, who also boasts a wealth of international experience, and two additional Mexican officials.

As part of their visit to Mexico, LeMonnier Barinaga, Matos and Rubio will conduct an officials’ clinic in Monterrey on Friday, December 20.