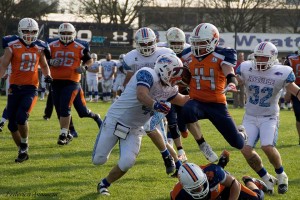 Central College will head to Europe for a fourth time with Global Football as the Dutch football team visits Greece and Italy and faces the Roma Grizzlies club team on Sunday, May 24.

The Dutch, who finished with an 8-2 record in 2014 under head coach Jeff McMartin, have previously visited Italy (2011 and 2007) and Switzerland and Germany (2004) with Global Football, capitalizing on NCAA rules that allow Division III schools to travel overseas to play every three years.

Their opponent, the Roma Grizzlies returned to the top level of the Italian Football League in 2015 in the south division under head coach Claudio Faccini, having won the second division title two years running.

“It is always special to visit Rome with our teams, as there is so much history and culture there to enjoy,” said Global Football President Patrick Steenberge. “Having the chance to play the Roma Grizzlies in their quality facility will be wonderful for all our traveling players, coaches and fans of Central College. We appreciate all the effort of the Grizzlies to welcome the Dutch.”

The Dutch football roster will practice at home in Pella, Iowa ahead of their tour and meeting on the gridiron with the Grizzlies, allowing ample time while traveling to experience the sights and culture of two of Europe’s most historical and stunning nations.

Upon arriving in Greece, the Central touring party will visit the historic district of Plaka, the Temple of Olympian Zeus, Hadrian’s Arch, the first Olympic site, the sprawling Acropolis, the Parthenon and important landmarks of today, including Syntagma Square, the Parliament building and Omonia Square. Having explored the impressive ruins at Delphi, which the Greeks consider the center of the world, they will board an overnight ferry from Patras to Italy. There they will visit Pompeii, which was buried in mud and ash for nearly 2,000 years after Mount Vesuvius erupted and then ancient Roman landmarks, including the Colosseum, Roman Forum, Pantheon, Trevi Fountain and Vatican City.

One of the winningest active coaches in the US, Jeff McMartin has guided his alma mater to four Iowa Conference football titles while earning four NCAA Division III football playoff berths in 10 seasons, posting a 79-27 record (.745). He is a three-time conference coach of the year (2005, 2006, 2007) and was named an AFCA Division III regional coach of the year in 2007. McMartin’s squads have posted three undefeated regular seasons, with a 28-game regular-season win streak from 2006-08.

In 1982, the Grizzlies were the first team in Rome to participate in the national AIFA (Italian Association of American Football) championship and under president Nicola Pietrangeli, were among the strongest teams in the league. Five years later the team disbanded, but in 2004 a group of passionate former players established the ASD Grizzlies Rome American Football Team, which grew from playing flag football, to joining the national tackle league in 2007, while also introducing a successful youth set up.

From 2004 to 2006 the Grizzlies were continuously among the top eight flag football teams in Italy and claimed second place in 2011. In 2007, they took part in the first season of Third Division 9-man tackle football, winning the title in 2009 and earning promotion to the Second Division of 11-man football.

The Grizzlies youth team won the Italian Under-18 Championship in 2011 and took second place in 2012. The senior team was crowned champions of the Italian Division II in 2013, having been runners up the previous season and won the title again in 2014, this time accepting promotion to the top flight.