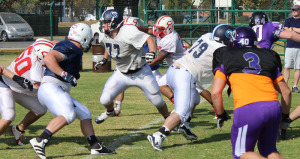 Head coach Don DeWaard, the Central College defensive coordinator, was an assistant on that team and since taking over the reins has posted two wins and no defeats in leading the NCAA Division-III all-stars to victories over CONADEIP in Monterrey last year by a score of 29-7 and in Guadalajara on his head coaching debut by 32-15 in 2012. The last coach to lead the Mexican hosts to victory was American Eric Fisher, head coach of UDLAP, in that game three years ago and he will again direct the fortunes of the CONADEIP all-stars in an intriguing encounter.

“We’ve got a lot of work done and we’ve got a pretty good football team getting ready for a great football game on Saturday,” said De Waard after his squad of 40 players from 17 NCAA Division-III schools held its penultimate practice. “Everything that we’re going to attempt to do we’ve talked about in practice. We might have to pair it down a little bit, but so far, so good.”

The sixth annual Tazón de Estrellas will be broadcast live from Puebla at 2pm EDT (1pm local time) on Saturday via a webcast, available with Spanish language commentary at http://www.tvudlap.mx/.

Game Notes: The Americans have been putting in work on the practice field at Universidad De Las Americas Puebla (UDLAP), completing their two-a-day sessions on Thursday… Giving back to the local community, the Team Stars & Stripes squad undertook a service project coordinated by Tec de Monterrey Puebla… The game marks the 17th time Global Football has taken standout NCAA D-III football players south of the border, beginning with the original Aztec Bowl in 1997… Head coach Don DeWaard takes charge of his third Tazon de Estrellas having previously served as an assistant coach and defensive coordinator… the game is the fifth time on the staff for Joe Austin (Southwestern University) and third for Jim Catanzaro (Lake Forest College)… Player Personnel Director John Roslien (Central College) has ventured south of the border on all 17 Global Football visit to Mexico for the annual game… CONADEIP head coach Eric Fisher was named Sporting Director of the Department of Sports UDLAP and head coach of the football team in 2009… He was named coach of the year and won the CONADEIP championship in the 2010 season… Veteran official Bill LeMonnier will take charge of the Tazón de Estrellas (Bowl of the Stars) for the fourth time on Saturday… LeMonnier officiated the 2011 BCS National Championship Game between Auburn and Oregon and in 20 seasons with the Big 10 Conference, was honored with 16 Bowl assignments… Center judge Mario Matos and head linesman Alex Zarganis have officiated previously at the Tazón de Estrellas and the Global Kilimanjaro Bowl (Tanzania, 2011)… They will be joined by Mexican officials side judge Edmundo Rubio, field judge Sergio Avila, line judge David Avila, umpire Ivan Veronico and back judge Ricardo Siller… Notable game alumni include former Washington Redskins Pro Bowl LB London Fletcher (John Carroll / 1997 game), Buffalo Bills RB Fred Jackson (Coe College / 2002 game) and Miami Dolphins LB Jason Trusnik (Ohio Northern / 2007 game).

“Our offense can seem complex, but it is user friendly and our guys have picked it up real quick. We have put a lot in so far. The guys are not just talented, but smart and they know what to do. I am amazed at how much offense we have in and how good we are in practice. Hopefully that carries over to Sunday.

“We only have eight guys, but that is not a challenge at all. The challenge is to get some continuity with the eight guys we have in a very short period of time. It’s good that we are coaching smart kids who know how to play on the offensive line. Many of the guys will play multiple positions. It’s been really fun. The guys are focused on learning our system both in team meetings and on the practice field. We will keep things simple and by the end of the week when it’s time to play we will ready to go.”

“Every December it is an honor to work with some outstanding men who will coach and lead select Division III senior ambassadors as they experience Mexico for a full week and then compete against their top players. With all that is involved this event is totally unique in college football.”

In 2011, the third annual Tazón de Estrellas was played at El Tempo del Dolor (Temple of Pain) in Puebla and the CONADEIP All-Stars triumphed 45-27 over Team Stars & Stripes, drawn from 28 D-III colleges in the United States, in front of a close to capacity crowd.

After the visiting Americans raced to a 14-0 lead early in the game, their Mexican hosts scored 38 unanswered points to take control of the game. Team Stars & Stripes gained some offensive momentum in the fourth quarter but two late touchdowns were not enough to make a dent on the final outcome.