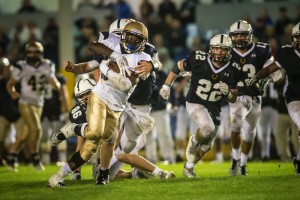 The spotlight of Friday Night Lights shone brightly on the Cedar Cliff Colts and Penn Manor Comets at the University College Dublin Bowl on August 29, but it was the entire unforgettable experience of the Global Ireland Football Tournament 2014 that will live longest in the memories of all those who were a part of the event.

The Comets emerged victorious with a 27-20 win over Pennsylvania high school rival the Colts to highlight an exciting week of discovering a new culture, making new friends, sightseeing on the Emerald Isle, and being immersed in a weekend of American football fever that gripped Ireland.

“It was an incredible experience for both teams and it’s unfortunate somebody has to lose,” said Penn Manor head coach Todd Mealy. “The kids played hard on both sides and gave the people in Ireland a heck of a game to watch. This is special for both of our communities and we’re fortunate to be the ones that came out on top.”

In truth there were no losers. Both sets of players, coaches, families and friends returned to the United States celebrating a unique life-experience. There are some 14,000 U.S. high schools that played games Labor Day weekend, but only two who got to compete in Ireland!

“I just wanted to say thank you for allowing the Ireland trip to happen,” said Penn Manor quarterback Tanner Erisman in an email to Global Football President and GIFT 2014 organizer Patrick Steenberge. “The trip will be one that I will forever remember for the rest if my life. Perhaps one day our paths will cross again, but until then, farewell my friend!”

Erisman was later selected by Sports Illustrated to appear in the magazine’s illustrious Faces In The Crowd feature in recognition of his performance on the field.

Many partners, volunteers and friends of Global Football contributed to the success of GIFT 2014: 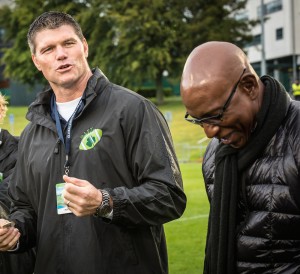 Honorary Chairman Kyle Brady spent a week discovering his Irish heritage and connecting with relatives he had never met before his visit to Ireland, then dedicated his time in Dublin to the GIFT 2014 event. Whether speaking at the Thursday dinner pep rally in Trinity College, performing the coin toss before kickoff, or talking to players until the last person had left the field after the game, Brady shook the hand of everyone connected with the GIFT event – and had his photograph taken with them. The former NFL tight end joined guests of Global Football in a suite for the Croke Park Classic as his alma mater Penn State beat UCF with a last second field goal. Brady was joined for the GIFT 2014 coin toss by Pro Football Hall of Fame running back Eric Dickerson. 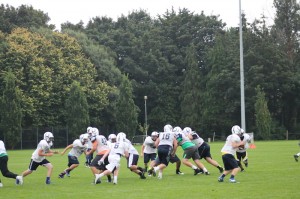 Led by Director of Sport Brian Mullins, the staff at University College Dublin ensured top class practice facilities were available for both teams, who prepared for the GIFT game on plush grass pitches on the UCD campus. On game day, the UCD Bowl that had been the practice home of Penn State earlier in the week provided the perfect setting for the high school game of a lifetime.

Through a partnership with Abbey Tours and Anthony Travel, all members of the GIFT traveling party had an opportunity to take in the sights of Ireland including Dublin City Centre, St Patrick’s Cathedral, Causey Farms and Malahide Castle, and enjoyed a pregame tailgate in the GAA Museum inside historic Croke Park before Saturday’s NCAA college football season opener.

The GIFT 2014 event established a special relationship with the Gaelic Athletic Association (GAA) and with Croke Park, being recognized as an official partner event of the Croke Park Classic. It was a conversation between Global Football President Patrick Steenberge and Director General of the GAA Paraic Duffy that led to talks between Penn State and Croke Park to put the wheels in motion for college football to return to Ireland.

Penn State students from the John Curley Center For Sports Journalism and College of Communications were on hand throughout the build-up to GIFT 2014 and during the week of event to create storylines and content for Pennsylvania media to use in previewing both GIFT 2014 and the Croke Park Classic. PSU students Mike Esse and Joe Garofalo volunteered to commentate on the webcast that allowed families and friends back home in Pennsylvania to watch Cedar Cliff and Penn Manor in action from the UCD Bowl.

The GIFT 2014 webcast was produced by Aertv, who lead the way for live online television in Ireland and have years of experience working in TV and has produced more than 600 live events for high-profile clients, in addition to working with 30 Irish sporting organizations. 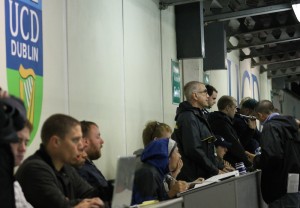 GIFT 2014 Honorary Chairman Kyle Brady spoke at a Price Waterhouse Cooper dinner along with key Irish political leaders and Chief Executive and founder of the Gaelic Players Association Dessie Farrell. Global Football President Patrick Steenberge was congratulated for his role as the catalyst in the creation of the Croke Park Classic and for the reason PWC had brought many influential representatives of Irish and American businesses together for the dinner in Dublin.

So while the result of the game played under Friday Night Lights made the media headlines, it was the full experience of a unique and unforgettable visit to Ireland with Global Football that has created memories of a lifetime.