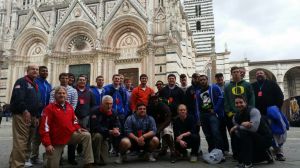 Head coach Bill Gallagher of Episcopal Academy in Philadelphia will lead the Americans, as the eighth annual Global Bowl returns to Italy having been contested previously in Japan (2008 and 2009), France / Belgium (2010), Germany (2011), Italy (2012 and 2013) and Spain (2014), with Team Stars & Stripes boasting a 5-2 record against local opposition.

“It is always an honor to bring top quality high school seniors, true ambassadors, to a country like Italy to promote the sport and to provide them such a learning experience,” said coach Gallagher. “The challenge this year is especially interesting as we will be playing a true club team at the U19 level, the Marines, along with other selected players from the Rome region. Our young men have been preparing, our coaches teaching, all the while bonding together as a team, so Sunday’s game should be fun for everyone.”

Game notes:
• Team Stars & Stripes boasts an all-time 5-2 record on their travels since 2008.
• A pair of quarterbacks from Philadelphia area schools will lead the Team Stars & Stripes offense. Ryan Whayland, who threw for 1,608 yards in 2014 for Episcopal Academy, and Zach Carroll of Father Judge are expected to see time under center for the American select team.
• Assistant coach John Storey of Villa-Angela St. Joseph High School in Cleveland, OH, has coached in each of the seven previous Global Bowl games.
• Coach Evan Sharpley played both football and baseball at the University of Notre Dame.
• The offensive line protecting them will be anchored by 2014 All-Inter-Ac First Team selection John Minicozzi of Episcopal Academy.
• From Arizona, center Paul O’Donnell and linebacker J.P. Ramirez of Mountain View High School were named to the 2014 All-Southern Arizona second team, while teammate wide receiver Justin Guana received an honorable mention, as did lineman Bernie Soto of Canyon Del Oro.
• Three members of the roster from Tesoro (Calif.) High School include 2012 Varsity Rookie of the Year, 2013 Varsity Ironman of the Year, 2013 2nd Team All South Coast League selection Nick Fehrenbach on the defensive line. On the offensive side of the ball, teammate Zach Hickman was named All-CIF, First Team All-County and First-Team All League.
• Villa Angela-St Joseph from Cleveland has provided players to the Team Stars & Stripes roster since the touring select side first traveled to Japan in 2008.
• Jack Gallagher and Daniel Cervenik of VASJ will handle the kicking and punting duties.
• Indiana’s sole representative on the roster will be RB/LB Christian Miller of Northridge High School, whose defensive leadership helped his team to the state semi finals last season.
• Head coach Bill Gallagher played in the same backfield as Global Football President Patrick Steenberge at the University of Notre Dame in 1970 and ’71.