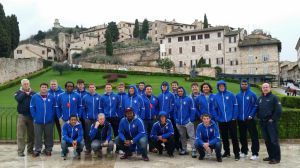 Global Bowl Italy will be broadcast via a live stream on Sunday, March 29, as Team Stars & Stripes takes on the Lazio Marines Under-19 team in Global Bowl Italy at 12 noon ET / 6pm local time.

American football fans around the world, including family and friends of the high school football standouts from Arizona, California, Indiana, Ohio and Pennsylvania, can watch Sunday’s game live at the following link: http://new.livestream.com/accounts/5994472/events/3913982

The game is the second of a double-header from Italy as the Lazio Marines senior team takes on the Dolphins Ancona at 8am ET / 2pm local time in a game that will also be streamed live.

Head coach Bill Gallagher of Episcopal Academy in Philadelphia will lead the Americans, as the eighth annual Global Bowl returns to Italy having been contested previously in Japan (2008 and 2009), France / Belgium (2010), Germany (2011), Italy (2012 and 2013) and Spain (2014), with Team Stars & Stripes boasting a 5-2 record against local opposition.