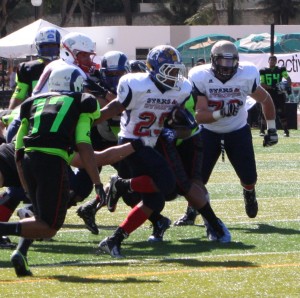 Global Football President Patrick Steenberge will be a guest of the CONADEIP College American football organization in Mexico when he visits Monterrey this weekend to plan the fifth annual Tazón de Estrellas (Bowl of the Stars), the 15th annual post-season game in Mexico for NCAA Division III stars.

Steenberge will attend the hotly anticipated Friday night game between Tec de Monterrey, the champions of CONADEIP and the UANL Tigres, champions of ONEFA and cross-town rival, on the Tec de Monterrey campus.
In December the NCAA Division III all-star roster known collectively as Team Stars & Stripes will again face the CONADEIP All-Stars in December, in this same stadium.

“I am always eager to return to Mexico to plan events with my friends there who are so dedicated to their student athletes and providing unique opportunities for them,” said Steenberge. “The chance to plan for the Tazon and attend this huge pre-season Bowl game in Monterrey will make it especially interesting, as they have not played one another since 2007 when the ONEFA split into two leagues. I am sure it will be a dramatic game, and set the stage for our Team Stars & Stripes match there on December 21.”

In 2012, the Americans scored 15 unanswered points in the second quarter and went on to defeat the CONADEIP All-Stars 32-15 at Fortaleza de Azul in Guadalajara. The Americans evened the series at 2-2 against the Mexican hosts and won on the head-coaching debut of Don DeWaard of Central (Iowa) College.

De Waard, the defensive coordinator at Central, is a veteran of previous Tazón de Estrellas and its predecessor the Aztec Bowl. Last year he took over the head coaching responsibilities from former Weidner College head coach Bill Manlove, who was at the helm from 2009 to 2011.

The Team Stars & Stripes roster will again be selected from graduating college seniors at the D-III level who will travel to Monterrey for a combination of two-a-day practices with an opportunity to explore the local region before the Saturday game.

The Tazón de Estrellas and its forerunner the Aztec Bowl have produced a series of exciting games and established a fierce but friendly rivalry between the Americans and Mexicans. The Tec Monterrey All-Stars won 24-12 in 2009 before Team Stars & Stripes leveled the series with a 48-7 victory in Toluca in 2010 and the CONADEIP All-Stars won by a margin of 45-27 in 2011. It was the turn of the Americans to triumph in 2012.