Hall of Fame Running Back In Dublin For GIFT Event 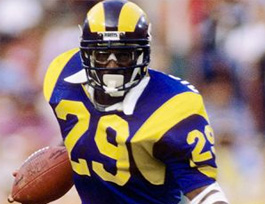 Pennsylvania high school American football rivals the Cedar Cliff Colts and Penn Manor Comets will open their new season at the University College Dublin UCD Bowl at 7pm on Friday and Dickerson and Brady will join the team captains at midfield before kickoff. The NFL greats will also be guests in the Global Football suite at Saturday’s game between Penn State and UCF, the Croke Park Classic partner event of GIFT 2014.

Dickerson played with the Los Angeles Rams and Indianapolis Colts of the NFL during a distinguished career and was enshrined in the Pro Football Hall of Fame in 1999. He still holds the NFL rushing record of 2,105 yards in a single season set in 1984. Dickerson was selected in the first round of the 1983 NFL Draft (second overall) by the Rams, having played college football at Southern Methodist University, where he was part of the famed ‘Pony Express’ rushing attack and was a Heisman Trophy candidate.

Former Penn State tight end Brady is the Honorary Chairman for the GIFT 2014 game and enjoyed 13 standout NFL seasons for the Jacksonville Jaguars, New England Patriots and New York Jets. He was a high school star for the Cedar Cliff Colts before making his mark with the Nittany Lions.

“We are honored to have Eric Dickerson join us in Dublin and thank him for his interest in this grassroots event,” said Global Football President Patrick Steenberge. “American football fans who were caught up in the craze that swept through Europe in the eighties will remember Eric for his devastating rushing performances that dominated the NFL for many years.

“Eric and Kyle join an illustrious group of professional football stars who have come out to support Global Football events over the years, which includes Emmitt Smith, Jason Taylor, Nick Saban and Leroy Butler.”

Tickets for GIFT 2014 are available at www.TicketGroup.ie priced €10 for adults and €5 for students. Direct link, while fans not traveling to Ireland can watch the game streamed live on Aertv Sportslive (sportslive.aertv.ie) for a subscription of $10.

GIFT 2014 is sanctioned by the Pennsylvania Interscholastic Athletic Association (PIAA), USA Football and the International Federation of American Football (IFAF) and is a partner event of the Croke Park Classic.