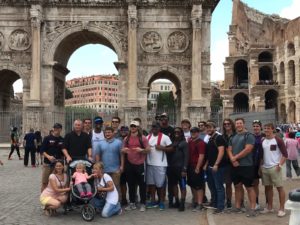 The Pirates visited the Colosseum, ancient Rome, took a Spanish Steps and Trevi Fountain walking tour, and visited the Vatican Museum, Sistine Chapel and St. Peter’s Basilica.  They traveled on via Sienna to tour Florence and then on to Fiesole in the Tuscan Hills.

A visit to the Ferrari Museum in Maranello was followed by game day on against Ferrara Aquile.  The group also took in Lido di Jesolo and a guided walking tour of Venice and visits to Milan and the breathtaking Lake Como.

On game day, a Chris Demny pass to Nik Kelly for
a 60-yard strike was a spectacular way to open Southwestern University’s 94-point win over Aquile Ferrara of the Italian Football League and was quickly followed by two more touchdowns in as many plays.  Craig Heiser to Tate Schorr for 40 yards made the score 14-0 then Kelly produced a pick-six for a 21-point advantage.  Dylan Wilburn runs from 18 and 8-yards out completed the first quarter scoring. 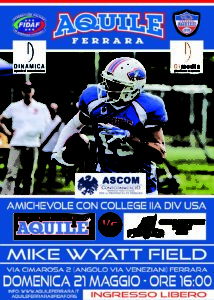 Tate Schorr returned an interception 47 yards for a touchdown, Demny reeled off a 43-yard scoring run, and a 19-yard fumble return for a touchdown for Tanner Rogers made it 56-0 at halftime.

A 35-yard pick six for Keyshaan Castle less than a minute into the third quarter was followed by a 28-yard TD pass from AJ Daniels to Landry Bray, a 10-yard scoring run by Demny and a 3-yard end zone reception by Daniels from Heiser.  Two 23-yard Hayden Smith rushing touchdowns in the fourth quarter completed the scoring for the Pirates.