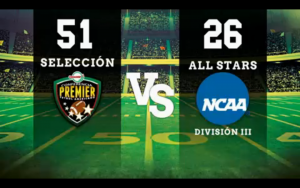 The CONADEIP All-stars convincingly won the eighth edition of the Tazón De Estrellas (Bowl of the Stars) with a thrilling 51-26 victory over a Team Stars & Stripes select squad drawn from 22 NCAA Division III schools across the United States at Zorros Stadium at CETYS University in Mexicali.

The representatives of Mexico’s private universities led 35-13 at halftime having set the tone during an action-packed first quarter that produced a total of 28 points. After the break, the hosts controlled the tempo of the game and a dominating defense continued to frustrate and clamp down the Americans’ offensive threat.

The series between the traditional rivals is now tied at four wins each, with U.S. head coach Don DeWaard holding a 3-2 record. Global Football has taken NCAA D-III select teams of graduating seniors south of the border annually since 1997 to compete, originally in the Aztec Bowl, which was rebranded as the Tazón De Estrellas in 2009.

“We dug ourselves a hole early,” said Team Stars & Stripes head coach Don DeWaard.  “We didn’t make plays and got behind.  We came out on the second half and scored right away and got right back in it.  But we gave up too many big plays.  Mexico’s offensive line was fantastic.  We had trouble getting pressure and they made us pay for it.  Give Mexico credit – they were a very good football team.”

Leading an explosive offense, Mexico quarterback Diego Gomez completed 27 of 35 pass attempts for 389 yards and 5 touchdowns, and Jorge Retana caught 5 passes for 116 yards and 2 TDs, while Pedro Magallanes also had 5 catches for 70 yards and 2 scores.

Having got off to a perfect start on the opening possession, Gomez hit Pedro Magallanes with a 26-yard touchdown pass and then Jorge Retana and Eduardo Califa connected for a successful two-point conversion and an early 8-0 Mexican lead.

Having won the coin toss and deferred, Team Stars & Stripes moved the ball methodically downfield in reply, a key pass from Bryan Hicks (12-28-122-1-1) to Southwestern University teammate Dante Smith for 7 yards keeping the drive alive on fourth and three at the Mexico 28. But Hicks was sacked for a 9-yard loss on third down by Armando Fernandez, who then blocked a 32-yard field goal attempt.

The Americans responded perfectly as Riley Gray (Central College) took over under center at the hosts’ 41-yard mark following a 15-yard penalty enforced on the end of the kickoff and scored in reply. The quarterback hit Kyle Petermeier (Minnesota-Morris) from 4 yards out with 02:05 remaining in the first quarter and an Aaron Marcellus (Central College) extra point reduced the deficit to eight points.

The Mexicans responded with another touchdown as Gomez hit Jorge Retana beyond the U.S. secondary for a 33-yard touchdown pass. A missed extra point meant the hosts led 21-7 as the first quarter expired.

The contest continued to produce fireworks and Alex Pasiewicz (Lake Forest College) reeled off a 60-yard kickoff return to the Mexican 33-yard mark. The U.S. was unable to capitalize as when Hicks targeted Petermeier, Leopoldo Gutierrez came up with an interception in the end zone.

The Americans went to a trick play to keep the crucial first drive of the second half alive and to great effect as Smith caught a lateral pass and then connected over 25 yards with Darrien Myers (Trinity College) for a 25-yard gain. That set up a Hicks to Matt Gillen of Southwestern University (6-63-1) 12-yard touchdown pass, but the two-point conversion attempt failed and Team Stars & Stripes trailed 35-19, having reduced the deficit to 16 points.

A fumble then gifted the U.S. another possession, but a long drive ended with Gray being sacked on a fourth down attempt. That led to the Mexicans taking time off the clock on a drive that closed out the third quarter on a 42-yard Ricardo Flores field goal for a 38-19 lead.

A perfectly executed punt pinned the Americans down on their own 5-yard mark and unable to move the ball, a punt in response handed momentum back to the Mexicans. Four plays later, Julio Vazquez breached the end zone from 7 yards out and the CONADEIP All-Stars led 44-19.

Hicks threw an incomplete pass into the end zone on fourth down as Team Stars & Stripes appeared to have turned the ball over, but the latest in a string of penalties committed by the hosts produced a first down. Yet there was no way through a relentless Mexican defense as three incomplete passes and then a sack by Alan Mendez put the ball back in CONADEIP hands with only 3:30 remaining.

To rub salt into the wound, when the U.S. got the ball back, Fabrizio Salomon intercepted Hicks and returned the ball 80 yards, untouched down the left sideline for a touchdown and a 51-19 lead.

But Team Stars & Stripes refused to go down quietly and produced the game’s most spectacular play late in the fourth quarter. Zach Martinelli (Central College) raced 94 yards on the resulting kickoff return, breaking tackles to burst his way into the end zone for a touchdown and make the score 51-26.