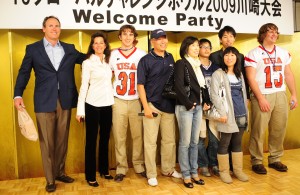 Japan, Mexico and Spain do not spring to mind as hotbeds of football, but two brothers from Baxter, Iowa, have been lured to those nations by the gridiron painted onto fields usually reserved for a round ball and soccer.

Zach Samson, a senior at Baxter Community School, heads to Barcelona this week, as a member of a Team Stars & Stripes.  The select roster of high school seniors from several states from Arizona to Pennsylvania will take on a local Cataluña representative team in Global Bowl Spain.  He will pull on a red white and blue jersey just as his older brother Danny (#15 pictured far right) has done twice before

Global Football, exporters of the game the rest of the world calls American football, has been giving high school and college aged student-athletes an opportunity to travel overseas and mix tasting new cultures with a chance to play against foreign opposition since 1996.  Six continents and 21 countries later, the adventures continue, with spring tours to Europe now a staple of the calendar.

The Global Bowl series has touched down in Japan, Belgium, France, Germany, Italy and now Spain where Zach Samson and Team Stars & Stripes will visit from March 22 to 30 under head coach Bill Gallagher of Episcopal Academy (PA).  Players are selected based on academic and personal qualities in addition to their performances on the field.

“Just going over there is going to be something special,” says Zach Samson, the younger of the brothers.  “It is going to be a lot of fun not only playing with a different team, but also playing in Spain, which will be a whole new experience.  I’m hoping the weather will be a little warmer than it is here at home right now.”

Zach has been eager to line up for Team Stars & Stripes since brother Danny traveled to Japan to play in the 2009 Global Bowl and spent a week living with a host family and taking in the sights of Tokyo.  On that occasion the Americans lost 38-21 in front of 5,000 fans at Kawasaki Stadium to a Japanese under-19 national team that would go on to finish third at the first-ever Junior World Championships.

Then in December, having played his final season at Central College, Danny was part of the college-age Team Stars & Stripes that won the Tazón de Estrellas annual all-star game in Mexico, beating a host team from the CONADEIP private universities 29-7 in Monterrey.

“We had a great time in Japan,” said Danny Samson.  “Knowing Global Football and my prior experience traveling with them, it was a no-brainer when I got invited to play in Mexico and that was just as much fun.”

So by the time the younger Samson was age-eligible to be considered for Team Stars & Stripes, the quarterback, who can also line up at tight end and on the defensive line, was determined to be on the plane to Spain to match his brother’s experiences.

“He really loved seeing a different cultures and I thought that was something I would like to do as a senior,” explained Zach.  “That was the spark for me.  I wanted to travel somewhere with Global Football and see how football overseas compares to ours.

“The longest trip I’ve been away from small town Iowa for was four days in Washington DC and New York when I was in the eighth grade.  This will be my first time overseas.”

For the game to be played on Saturday, March 29 in a picturesque Barcelona stadium just 100 yards from the beachside Olympic Village, the small roster size of the traveling Team Stars & Stripes group will require Zach to line up in multiple positions.  He expects to see time on the defensive line where brother Danny played in Japan and Mexico.

“He’s definitely the better defensive lineman,” admitted Zach, who hopes to play college football either at Buena Vista, or as a walk on at Iowa State.  “But I’ve got him on the offensive side of the ball without a doubt.”

Regardless of how they match up on the field, the Samson brothers will be able to compare equally when it comes to recalling off the field cultural experiences having played football overseas, many miles from small town Iowa.