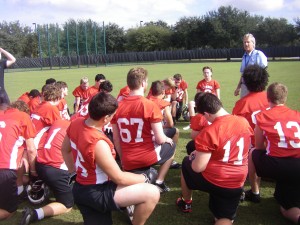 Toluca eventually edged fellow Mexican team Queretaro 26-20 after an epic battle as both made their debut at the Florida event.  Queretaro led 14-0 before Toluca scored two fourth quarter touchdowns to force overtime.

With the game on the line, both teams scored touchdowns in the extra period, but neither was able to tag on a winning extra point, before Edgar Zuniga caught the game-winning touchdown pass for Toluca just as the sun started to set over the ESPN Wide World of Sports Complex.

“It is great after four years of bringing teams to this fantastic event to have eight international teams in the division for the first time to be able to create a full bracket,” said Global Football President Patrick Steenberge.  “After an exciting day of action on the field, the teams will now enjoy a chance to relax and enjoy the resort before heading into the second round of games.  The organizers of all the teams have done a wonderful job and they deserve the break as much as the players.”

Canada East and Canada West both won their opening games to advance in the bracket with size, speed and the rushing game proving too much for their opponents.  Canada East triumphed 37-6 over Puebla, while Canada West won 36-0 over the Mexico 2 team from the FADEMAC league.

The other FADAMEC team Mexico 1 was locked in a scoreless tie with Panama with five minutes to play as both defenses had dominated and prevented either offense from advancing beyond the 30-yard mark.  The Mexicans scored twice late in the game to defeat the two-time Pop Warner International Division champions from Panama 12-0.

The action resumes on Thursday at 12pm when Canada East takes on Mexico 1 and Canada West faces Toluca in the winners’ bracket.  The other games see Puebla meet Panama and Queretaro go up against Mexico 2.