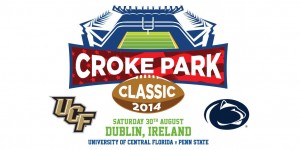 Croke Park and the Gaelic Athletic Association (GAA) today announced the 2014 “Croke Park Classic,” as Penn State will meet the University of Central Florida (UCF) in the Saturday, August 30, 2014 season opener for both teams.

Global Football President Patrick Steenberge was among the guests on the pitch during halftime in the Leinster Senior Football Championship Final between Dublin and Meath as Penn State Director of Athletics Dave Joyner and UCF coach George O’Leary announced details of the upcoming game.

The clash will take place at Croke Park, the headquarters of the GAA, in central Dublin. The international contest will be the first in Penn State’s 127-year gridiron history. UCF also will be playing outside the United States for the first time in program history. The Croke Park Classic will kick at 1:30 p.m. in Dublin (8:30 a.m. ET) and air on ESPN2.

The last American football game hosted in Croke Park was in 1996 when Notre Dame played Navy. The Irish and Mids played in Dublin’s Aviva Stadium to open the 2012 season.

Penn State will be the first Big Ten Conference team to play internationally since Michigan State and Wisconsin met in Tokyo in the 1993 regular season finale.

“This is a hugely significant event for Croke Park and Ireland. We in the GAA are looking forward to hosting a competitive sporting occasion.”  Said Páraic Duffy GAA Director General.

“Irish people are renowned for their love of sport as evidenced by the thousands who attend our games throughout the year.  I have no doubt that this game will be every bit as attractive. “

Last year’s game in Dublin is believed to have added €100m (approximately $130 million) to the Irish economy and contributed to the 1.6% rise in Tourism Ireland’s figures for August – October 2012 (CSO)

Minister for Transport Tourism and Sport Leo Varadkar said: “This will be a fantastic event for Croke Park and for Ireland. The Navy vs Notre Dame game in 2012 welcomed 35,000 U.S. visitors to Dublin. The “Croke Park Classic” will be every bit as important, and just as exciting, and both teams are guaranteed a warm welcome. It’s great news for sports fans, for the GAA and the wider economy. I congratulate everyone involved on making this possible.”

“Our visit this weekend has only reinforced our reasons for wanting to come and play in Dublin,” said Dave Joyner, Penn State Director of Athletics, who led the Nittany Lions’ delegation to Dublin this weekend. “We’ve not only grown our appreciation for the games so entrenched in the history and traditions here in Ireland, but have also confirmed that, because of the Irish people and their hospitality, Penn State fans are going to love their time here in late summer of 2014.”

“We are thrilled to announce that we will play UCF at Croke Park to open the 2014 season, “ said O’Brien, the 2012 Maxwell Football Club and Big Ten Coach of the Year. “Our players and coaches are so excited to go to Ireland and play a college football game in such a historic and outstanding venue. I have great respect for Coach O’Leary and his team and playing UCF in Ireland will be a fantastic experience for all the players, coaches and fans.”

“We are very excited about the prospect of playing our 2014 season opener in Dublin,” said O’Leary, in Croke Park for today’s announcement. “It’s a great opportunity for UCF, and a chance for us to grow the exposure of our football program.

“On a personal level, obviously Coach O’Brien and I are both of Irish heritage, so it means a great deal to both of us to be in a position to bring our teams here. We are confident that Croke Park will be an excellent venue for us to play in, we have been hugely impressed to date with the facilities and we are looking forward to a huge crowd to get our 2014 season off to a flying start. We are confident that Croke Park will generate an unforgettable atmosphere for this game.”

Fans interested in traveling to Ireland for the historic game can do so on the Official Penn State Tour, presented by the Penn State Alumni Association and the Nittany Lion Club. Packages include accommodations at three-, four- or five-star hotels, game tickets, an exclusive private party at the world-famous Guinness Storehouse, excursion tours, gameday transportation, a full Irish breakfast each morning and much more. Game tickets are currently available only through the Official Penn State Tour.

With the addition of the Croke Park Classic, the 2014 Temple at Penn State game will move to November 15, which previously was an open date for the Nittany Lions.