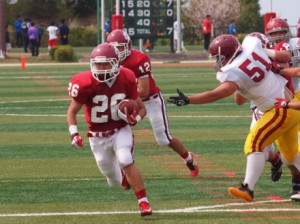 San Diego is poised to welcome a group of 19 Japanese student athletes from Ritsumeikan Uji High School in Kyoto to Southern California for a seventh time as part of a unique visit through Global Football.

From August 16 through September 2, the Japanese visitors will improve their English language skills and increase their knowledge of American football under legendary former Torrey Pines High School head coach Ed Burke, while enjoying an educational and cultural experience. The group will include two Japanese coaches / teachers and a coordinator who also serves as a translator.

“Every year Coach Burke does an amazing job of organizing this annual event, which is so special for the Japanese youngsters who come to learn football and English, but leave with much more and many lasting memories,” said Global Football President Patrick Steenberge. “We have exported American football to 21 countries around the globe, including Japan, and it is always exciting to be able to bring international youngsters here to the United States to taste our culture and make new friends.”

The visit also offers a new and exciting experience for families in the North County and San Diego areas, who will serve as hosts for the Japanese visitors, welcoming them into their homes and helping them explore the region during their stay.

Having arrived on Saturday, August 16, the student-athletes will spend their first day at the famous Sea World attraction. They will enjoy more than two weeks of sporting, educational and cultural activities before returning home on September 2. The visit will include a chance to watch the San Diego Chargers in preseason action against the Arizona Cardinals on August 28, and the USC Trojans take on Fresno State.

From Monday through Friday during the both weeks of their stay, the group will combine English classes at Torrey Pines High School with Mrs. Brenda Robinette with football practices, learning offensive, defensive and special team techniques, while also spending time in the weight room. Fellow former Torrey Pines head coach Scott Ashby will join Coach Burke and longtime Falcons assistant coach Jack Ashby, to pass on knowledge on the football field.

On Saturday, August 23, the fruits of the coaching sessions will be on display at 1pm at Torrey Pines High School stadium when the Ritsumeikan Uji squad led by coach Kei Higashimae scrimmages against Classical Academy, hoping to add to victories recorded on previous visits.

The Ritsumeikan visitors will cheer on their Torrey Pines new classmates on August 29 when the Falcons take on Pleasant Grove HS (Utah) in Torrey Pines Stadium on Ed Burke Field.

• Kyoto’s Ritsumeikan Uji Junior and Senior High School provides an environment where students can develop through involvement in various experiences inside Japan and around the world. Students hone their thinking skills and develop and deepen their humanity while expanding their English ability and basic academic skills.
• Coach Ed Burke coached for 21 years with the Torrey Pines High School Falcons, where he won eight league championships and four San Diego CIF titles before retiring in 2007. While accumulating a 182-60-5 record, he also nurtured five future NFL players including former Tampa Bay Buccaneers star safety John Lynch.
• The annual visit was first was conceived by top Japanese American football coach Shinzo Yamada, a former player in NFL Europe and the Arena League and Ritsumeikan Uji coach Kei Higashimae.
• Follow the visit on Pinterest:
http://www.pinterest.com/globalfootball/ritsumeikan-uji-high-school-san-diego-tour/