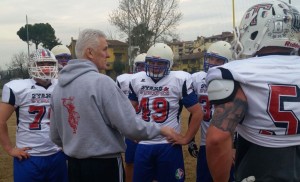 The student-athletes on the Team Stars & Stripes roster were selected from high schools in Arizona, California, Indiana, Ohio and Pennsylvania under head coach Bill Gallagher of Episcopal Academy in Philadelphia.

The overseas visit included opportunities to experience a new culture and visit some of the world’s most iconic tourist attractions. Since March 24, the group has explored ancient Rome, the Coliseum, Florence Tuscany, Siena and the Basilica of St Francis of Assisi. They will visit Vatican City before returning home on Tuesday.

Christian Miller (North Ridge, IN) raced 75 yards down the right sideline on a spectacular scoring run to open the second quarter and a 42-point lead.

The Marines put together a confident drive in response, moving the ball from deep in their own territory, but a quarterback fumble was recovered by Nick Fehrenbach (Tesoro, CA), who took the ball back 32 yards for the eighth touchdown of the first half.

Whayland rushed for a 10-yard score after the break and also threw a 26-yard touchdown pass to Kashta Davis (Germantown Academy, PA). Nelson added to his first quarter touchdown run by reeling in a 45-yard pass from Carroll and returning an interception 42 yards to score after the Italian hosts had put seven consolation points on the board.