Back in June 2012 Global Football held a press conference at the Mespil Bar in Dublin’s Burlington Hotel to introduce some of the prominent GIFT participants to the media and local dignitaries in attendance.

Regis Scafe, head coach of John Carroll University, whose Blue Streak football team was to open its new season in Dublin on August 31, joined Global Football President Steenberge at the media event, along with Brian Mullins, the former Gaelic Football star, who played with St Vincent’s and the Dublin Senior Team. The current Director of Sport at University College Dublin had been named as Honorary Chairman for the GIFT games at Parnell Park.

“Putting the sport on people’s doorsteps was very important to us,” Steenberge told the Dublin Gazette at the press conference as he confirmed that U.S. and Canadian high schools and two American colleges would play competitive regular season games at Donnybrook Stadium and Parnell Park in Dublin and Pairc Tailteann in Navan, County Meath.

“There is six hours of entertainment on offer, and the people who come along will get to under- stand that there is more to American Football than the top-level NFL- type matches. In the US, American Football is accessible to all people in local communities, and we wanted to do that here as well.

“Anyone who loves sport can come out with their whole families, and see home high-level competition. It’s not NFL or Division 1 college football, but it is very competitive and a lot of fun.” 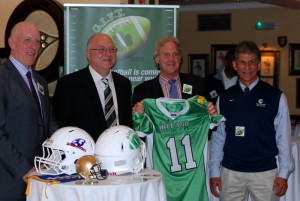 One of the attending dignitaries, Irish American Football Association president, Greg Loughran, presented Patrick with an Ireland American football jersey and said: “We are hoping that there will be a lot of buzz about the matches taking place later this summer, from the Notre Dame and Navy game all the way through to these college matches.

“We hope that the event will mean that there will be a lot more people getting interested in American Football, which we hope to pick up on, and let people see what we are doing about bringing people into playing the game in Ireland.”

After the press conference, the GIFT group headed to Trim Castle for a brief spot of sightseeing before visiting Pairc Tailteann in Navan, the home of the Meath GAA, which was to host one of the double-headers. 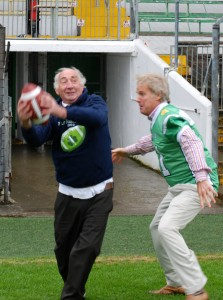 Barney Allen of the local GAA presented Patrick and Regis with game-worn jerseys before the trio threw an American football and kicked a Gaelic football on the hallowed Pairc Tailteann pitch for the benefit of local media.

“That was a great visit to Ireland and really set the tone for what was to be a wonderful event,” remembers Steenberge today, some two years later. “Everyone was so welcoming and enthusiastic and we knew from their support and the media turn out that we would have an incredible experience at GIFT 2012 – which we certainly did!”