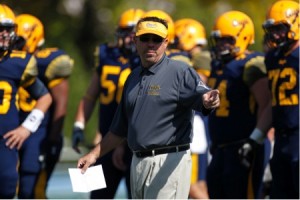 Augustana College from Illinois will travel with Global Football to France in July and face the French national American Football team as part of a cultural visit to Europe, as they have done during the past decade and half to Finland, Sweden, Austria, Switzerland, Italy and the Czech Republic.

Head Coach Rob Cushman will take the Augustana College Vikings to France from July 23-31, and will combine sightseeing and practices during the visit, before playing at the Stadium Lille Métropole in Villeneuve d’Ascq on Saturday July 27.

The French national team boasts a rich history and is comprised of the best adult players from across the country who play in the country’s strong and developing amateur league.  The game is part of their preparations for the 2014 European Championships.

In 2011 under head coach Larry Legault, France finished sixth at the 2011 IFAF World Championship of American Football held in Vienna, losing narrowly to Germany in the fifth placed game.  France defeated host Austria and was placed in a strong group, losing to Canada and Japan.

Augustana finished the 2012 season with a 5-5 record, finishing fourth in the College Conference of Illinois Wisconsin (CCIW) and Vikings linebacker Erik Westerberg was named CCIW Defensive Player of the Year.

Global Football President Patrick Steenberge commented, “It will be fun to travel with Augustana again, this time led by Coach Rob Cushman.  We feel linked to the Vikings’ history, having worked with previous head coaches Bob Reade, Tom Schmulbach and Jim Barnes on similar international tours.  A huge thanks goes out to Coach Cushman for his efforts to continue this tradition which is so powerful for the student athletes who travel, and for the team overall.”

Coach Cushman served as Augustana College’s defensive coordinator for two years before being named head coach in 2010.  Following huge success as head coach at Eastern Oregon University and Feather River Community College in Quincy, California, where he helped build the football program from the ground up, Cushman served as special teams coordinator/defensive backs coach in Ithaca, NY, before moving to Illinois to work with the Vikings.

“Augustana is excited to once again be a part of Global Football,” said coach Cushman.  “Our experiences in the past have been tremendously informative and our entire traveling party has always enjoyed itself. This is a great part of the entire learning process for our student-athletes and we look forward to playing in France this summer.”

French National Team Head Coach Larry Legault, looking forward to the event, said: “This promises to be a great test for France leading into the 2014 European Championship of Nations.  The opportunity to face opposition of this quality is rare and it will be a great way to measure our team’s progress.”

France finished as runner up in the 2010 European Championship and at previous World Championships finished sixth in 2007 and 2011 and fourth in 2003.

Augustana College will arrive in Paris on July 23, spending the next week participating in cultural and historical excursions, while getting in a couple of practice sessions along the way.  While in France the team will visit the Normandy beaches, and the Palace of Versailles among many Paris landmarks such as the Eiffel Tower, Louvre Museum, Notre Dame Cathedral and the River Seine.