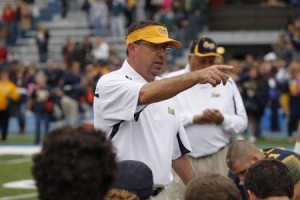 Global Football has teamed up with NCAA Division III college partners to give American football coaches around the world an opportunity to travel to the United States and enhance their coaching skills on the gridiron.

Now, the Texas-based organization is bringing coaches initially from Europe and later other countries where the game known as American football is played, to the United States as part of a unique program called ‘ICE’ – the Global Football International Coaching Exchange.

Want to take part in the Global Football ICE initiative? Contact Patrick Steenberge: patrick@globalfootball.com about your club hosting a U.S. team to open up this opportunity.

“We believe this is a wonderful initiative that not only aids the development of overseas coaches, but also expands the friendships that develop when we take teams overseas,” said Global Football President Patrick Steenberge. “This spring when we took part in football activities while traveling to Denmark, Italy, Norway and Scotland, the American and European coaches bonded over a shared love for the sport, as they do every year.

“This idea was conceptualized in Rome between the Roma Grizzlies head coach and Central College’s Jeff McMartin, who talked following their friendly game. I am happy to facilitate this now, getting started this August.

“We want to be able to repay that great hospitality we always receive around the world by having our traveling American schools host a guest coach as an extension of their visit.”

Connections have already been established in Italy and Scotland.  FIDAF and Italian Football League (IFL) clubs participated in the summer of 2015 as did coaches from the East Kilbride Pirates. Global Football has undertaken 24 tours to Italy since 1996 and visited Scotland for the first time in 2015.

In 2016, Global Football has a potential 12 spring tours to nations including: Austria, Czech Republic, Germany, Great Britain, Greece, Ireland, Italy, Mexico, Scotland, Spain, Switzerland and Panama, allowing host clubs’ coaches to have an opportunity to participate in the ICE initiative in August 2016.