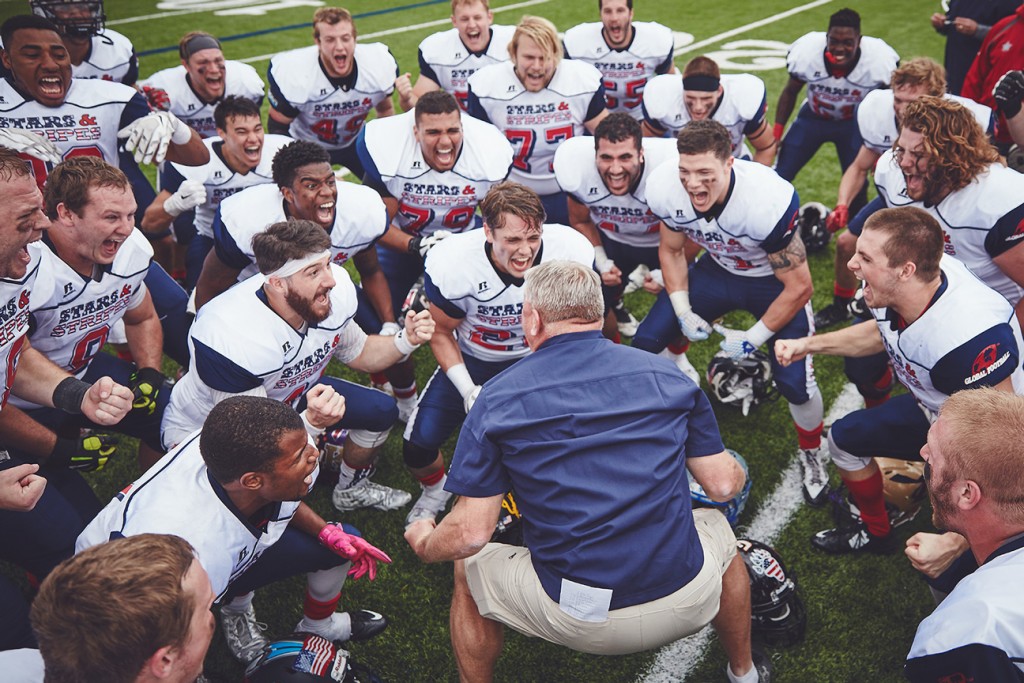 Global Football president Patrick Steenberge developed and organized the Tazón de Estrellas in association with the CONADEIP private universities in Mexico and Division III schools in the United States since 2009, after having produced the Aztec Bowl for 11 years 1997 to 2007, working with the combined CONADEIP and ONEFA leagues.

The annual event gives student-athletes from the U.S. an opportunity to travel internationally and enjoy a cultural exchange, then to compete against their Mexican counterparts on the football field. The event features Team Stars & Stripes, an American select team made up of non-scholarship Division III senior college football players traveling annually to Mexico to take on the home team CONADEIP All Stars.

In 2017, the CONADEIP All-Stars produced a stunning and unlikely comeback to overturn a 24-point deficit and dramatically win the 20th annual Tazón De Estrellas by a score of 28-24 in Tijuana.  Trailing 24-21, Mexican RB Kevin Correa was handed the ball to burst in for the decisive touchdown to spark wild celebrations at the Margarita Aztiazarán de Fimbres Stadium at CETYS University, which was the scene of a dramatic one-point American victory two years earlier.  A successful extra point meant Team Stars & Stripes had only 1:05 to find the end zone themselves, but a swarming Mexican defense had other ideas and preserved the famous victory.

The CONADEIP All-stars convincingly won the eighth edition of the Tazón De Estrellas in 2016 with a thrilling 51-26 victory over a Team Stars & Stripes select squad drawn from 22 NCAA Division III schools across the United States at Zorros Stadium at CETYS University in Mexicali.

The representatives of Mexico’s private universities led 35-13 at halftime having set the tone during an action-packed first quarter that produced a total of 28 points.  After the break, the hosts controlled the tempo of the game and a dominating defense continued to frustrate and clamp down the Americans’ offensive threat.

Team Stars & Stripes recovered from a 14-point deficit in 2015 to produce a stunning a fourth quarter comeback and claim a 15-14 win. With his team trailing by seven points and three yards from the end zone, quarterback Brady Huber was flushed from the pocket, but retained his composure to find George Vidas for a touchdown, meaning the Americans trailed by a point. Head coach Don De Waard decided to go for it all rather than kick the tying point and a perfectly executed two-point conversion pass from Matt McDaniels to Huber capped a thrilling victory.

In 2011, the third annual Tazón de Estrellas was played at El Tempo del Dolor in Puebla and the CONADEIP All-Stars triumphed 45-27 over Team Stars & Stripes, drawn from 28 D-III colleges in the United States, in front of a close to capacity crowd. After the visiting Americans raced to a 14-0 lead early in the game, their Mexican hosts scored 38 unanswered points to take control of the game. Team Stars & Stripes gained some offensive momentum in the fourth quarter but two late touchdowns were not enough to make a dent on the final outcome.

The Tazón de Estrellas was established after the Aztec Bowl came to an end in 2007. Former AFCA President, Coach Ron Schipper, who led Central College for 35 years from 1961 to 1996, helped conceive the idea of the Aztec Bowl, as an event that would provide NCAA Division III senior football players with a true post-season event.

In the 1997 Aztec Bowl, the U.S. All-star team won in a thrilling manner, as Chris Kondik (Baldwin-Wallace) kicked five field goals and the U.S. defense thwarted a late Mexico two-point conversion to win a wild 42-41 shootout in Toluca, Mexico.

The U.S. teams dominated the following two years defeating Mexico by a score of 44-13 and 40-13 in 1998 and 1999, but only narrowly defeated Mexico in the 2000 Aztec Bowl in Merida, Mexico. That year, Illinois Wesleyan’s Jeff Heinzl deflected a Mexico PAT attempt with one minute left in the game to give the USA a 27-26 win over Mexico.

In 2003, the United States suffered their first defeat in the Aztec Bowl history. The U.S. All-Star team overcame a record 180 yards in penalties but could not survive two fourth quarter turnovers as Mexico rallied from a 31-13 deficit to win the 2003 Aztec Bowl 34-31 at Estadio Cancun.

The United States bounced back the following year, defeating Mexico 23-3 in the 2004 Aztec Bowl at Estadio Cancun 86 in Cancun. In the victory, Otterbein’s Micheaux Robinson returned a second half interception 60 yards for a touchdown and Wooster’s Tony Sutton ran for two scores.

The U.S. All-Star team won the last four Aztec Bowls from 2004-2007 for an overall record of 9-1 in Global Football-produced Aztec Bowl History. The Aztec Bowl was established in 1950 and was played intermittently between U.S. college teams and Mexico All-Stars until 1986. The series then became an annual fixture and was organized by Global Football from 1997 until 2007. The event has been played in 11 different Mexico cities, allowing fans nationwide, where American football has been played for more than a century, the chance to witness this game. Nearly 800 Division III senior student athletes have represented the sport and their schools in Mexico through this game!