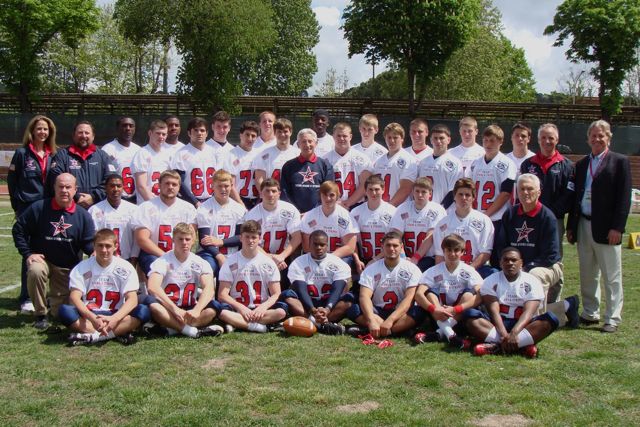 A brief history of the Global Ambassadors Bowl

The story began in 2008 when Arizona high school coach Jeff Scurran took a squad of 40 players from 27 high schools from across 12 states to Tokyo to face the Japanese Under 19 national team. The Americans were unable to recover from conceding 17 unanswered first half points and despite outscoring Japan after the break went down to a 24-14 defeat at a Kawasaki Stadium overflowing with 4,800 enthusiastic football fans.

But the visit to Japan was about far more than just football. The players all lived with Japanese families for the duration of their stay and spent each day learning about the nation’s culture through a series of field trips, visits to historical sites and interaction with their hosts.

In 2009, a 45-man roster drawn from 12 states first practiced and roomed at U.S. military Yokota Air Base in the shadow of Mount Fuji before relocating to Kawasaki to live with host families and take in the sights of Japan’s spectacular capital city Tokyo. Japan again proved formidable opposition, earning a 38-21 victory, despite a late American comeback attempt.

Team Stars & Stripes overwhelmed a Brussels All-Stars team in 2010, as Europe became the focus for the Global Bowl, the Americans running out 83-0 winners in Amiens near Paris. The weeklong tour included a sobering visit to the site of the Normandy beach landings and an opportunity to witness the stunning beauty of Paris.

In 2011, Team Stars & Stripes shut out the Munich Cowboys Juniors to record a 34-0 victory in the Global Germany Bowl in Bavaria. The group of 30 high school seniors from seven states led 28-0 at halftime and then added six second half points. The game capped a week of practices and cultural sightseeing in Rothenburg, Munich and the Bavarian Region.

In 2012, represented by players from 20 U.S. high schools from six states, Team Stars & Stripes faced the Italian Under-19 national team in a Global Bowl Italy game that featured in an hour-long CBS Sports Network broadcast. Viewers to the TV documentary saw a 55-0 win and followed the activities of the traveling group away from the football field, as they visited the picturesque spa town of Montecantini Terme, where the team practiced, Florence, the rolling hills of Tuscany, Rome via the Basilica of St Francis of Assisi, Ancient Rome, the Coliseum and finally The Vatican.

In 2013, Team Stars & Stripes, made up of 39 student athletes from 10 different high schools across six states, fired 67 points against the Italian Under-19 National Team to win the Global Bowl Torino. Kicker Anthony Bagliano, who was born with a condition known as Holt-Oram syndrome and despite having virtually no arms and enduring multiple heart conditions, kicked a 17-yard field goal for Team Stars & Stripes and also kicked off for Italy to start the game.

In 2014, the Team Stars & Stripes high school select team traveled to Barcelona, Spain, and beat a Cataluña representative team 47-6 in front of 1,100 fans. After representing the United States on the football field, David Odgen and John Reynolds, who both played on the offensive line, left to serve their country in the military. After graduation, Ogden joined the U.S. Naval Academy, while Reynolds was bound for West Point.

In 2015, Team Stars & Stripes defeated Lazio Marines 75-7 to win Global Bowl Italy. The overseas visit included opportunities to experience a new culture and visit some of the world’s most iconic tourist attractions. The group explored ancient Rome, the Coliseum, Florence, Tuscany, Siena, the Basilica of St Francis of Assisi and Vatican City.

2016 saw a return to Germany to face the Hanau High School All-Stars, bolstered by a strong contingent from Belgium and a few American boys for the DoD schools. Team Stars & Stripes ran out 36-0 winners. The traveling group first visited the Czech Republic, taking in Prague, touring the Old Town, the 18th century Church of St Nicholas, the beautiful Goltz-Kinsky Palace, and the medieval Charles Bridge. They visited the Terezin concentration camp, the Museum of Communism, a Nuclear Bunker and Krizik’s Fountain before heading to Germany to explore medieval Rothenberg.

In 2017, China became the 28th country to welcome Global Football travelers when hosting the Global Ambassadors Bowl. Team Stars & Stripes experienced spectacular cultural sites including the Great Wall, the Forbidden City, Tiananmen Square, the Beijing Olympics Complex, and a Shanghai River tour.
The visiting players and coaches held a youth clinic before winning 56-0 against the Chinese American Football Academy in front of a crowd of 800 spectators at the Shanghai Lixin University of Commerce Stadium on a warm and sunny Saturday afternoon in Shanghai.

In 2018, Team Stars & Stripes posted a 69-0 win over the FIDAF Regional U19s in Cave near Rome, Italy. The Italian team, drawn from local clubs, trailed 55-0 at halftime, but the annual game is about much more than the final score. As the FIDAF USA Experience Director Fabrizio Cuppelini commented following the day of football action: “Our boys love this chance to test their skills, to learn from Americans who have so much more experience, and to meet young men who play with the passion we are working to instill in our young athletes.”

Ireland and Scotland became the latest nations to welcome the Global Ambassadors Bowl in 2019 as a squad again led by Bill Gallagher and John Storey took on the East Kilbride Pirates Juniors, winning 55-8 at the picturesque University of Stirling. The overseas visit included a chance to experience St Patrick’s Cathedral, Trim Castle, the Gaelic Athletic Association Museum, Croke Park and the Guinness Storehouse while in Ireland. From Dublin, they headed north to visit Belfast before boarding a ferry to Scotland for walking tours of Edinburgh and Glasgow.