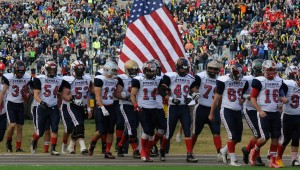 The All- Tazón team was selected by a panel of veterans of the Tazón De Estrellas (Bowl of the Stars) and its Global Football-organized predecessor The Aztec Bowl, from games played between 1997 and 2016. Players were chosen based on their on-field performances and the leadership qualities they displayed south of the border, by 20-year veterans of the event, Global Football President Patrick Steenberge and player personnel director John Roslien (Central College), and several coaches who have traveled as members of the Team Stars & Stripes staff during the past two decades.

“It has been an amazing run during the past 20 years, and the chance to interact with more than 900 D3 student athletes and dozens of coaches and staff has been a true blessing,” said Global Football President Patrick Steenberge. “I am most grateful for the tireless efforts made by each or our staff, led by John Roslien, Frank Neu and Juan Lopez who year after year have kept this event running smoothly for the players and coaches. This stellar list, the All-Tazon Team, is representative of the talent and dedication of NCAA Division III football players. Congratulations to all.”

Former NFL running back Fred Jackson (Coe College) said of his 2002 experience playing in the game, when he was named MVP: “It is something you will always remember. We played against the national champion team mixed with other all-star players. It was a really good team. I remember how crazy the crowd was and the great team camaraderie.”

The selection of players from 20 different colleges comes ahead of the annual Tazón De Estrellas, being played for the 20th time, in 14 cities, this year at CETYS University in Tijuana on Saturday, December 16. The unrivaled event will again host a week-long event of team practices, community service during the buildup to the game between a Team Stars & Stripes squad of select NCAA Division III student-athletes, led by head coach Don De Waard, and the CONADEIP All-Stars from Mexico’s private universities.

Highlights of the players selected include (position, name, college, year):