In 2009, former Notre Dame head coach and College Football Hall of Famer Lou Holtz led a team of Fighting Irish Legends against the Japanese national team in the 2009 Notre Dame Japan Bowl at the Tokyo Dome, an event organized by Global Football.

The game was part of a celebration of the 75th anniversary of the Japan American Football Association (JAFA) and featured a roster of players from multiple eras, of ages spanning from 22 to 52.  Yes, wide receiver Kris Haynes – once a favorite target of Joe Montana for the Irish – was the old man of the group!

After a tryout in South Bend, the squad met up at the Notre Dame football facilities for a mini camp before heading to Tokyo where several days of practices combined with experiencing the Japanese culture and then the game itself against the Japanese national team.  national championship winning quarterback Tony Rice started under center for coach Holtz who had lost none of his competitive spirit and demanded as much from his players as he did during his time coaching the Fighting Irish.

Please enjoy this video from the event and the match recap below. 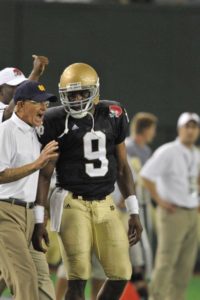 Jay Vickers ran for 139 yards, scored a touchdown and set up another to lead Lou Holtz’s Notre Dame alumni team to a 19-3 win over Japan in the Notre Dame Japan Bowl.

Vickers, who played in seven games for Notre Dame in 1997 and 1998, sealed the win on a 3-yard run late in the third quarter after Michael Goolsby’s interception.

Vickers’ 77-yard run in the second quarter shifted the momentum in Notre Dame’s favor. He was tackled at the 1, but quarterback Tony Rice punched it in to give Notre Dame a 10-3 lead.

“Coach Holtz said before the game that one play would likely be the difference and if that was it, so be it,” said the 31-year-old Vickers, who was chosen MVP. “I wanted to do this for Notre Dame and for my kids and I’m glad they got to see this.”

Japan went ahead late in the first quarter on a 31-yard field goal that Notre Dame quickly answered on Scott Cengia’s 37-yarder early in the second. 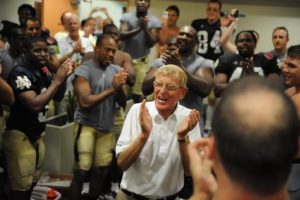 “I expected us to win but I knew it would be a tough game,” Holtz said. “We’re bigger but they were quicker and I give a lot of credit to Japan.”

Japan used the game to prepare for the American football world championship in 2011. It lost the 2007 final 23-20 in double overtime against the United States.