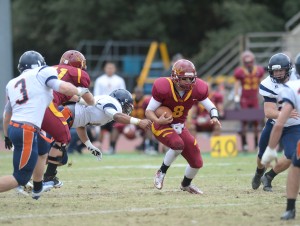 Claremont-Mudd-Scripps from California will head to Austria and the Czech Republic next week and face the Austrian National Team in the annual Charity Bowl as part of a nine-day overseas tour organized by Global Football.

The Stags will travel with Global Football, which has created and produced games and events in 21 different nations around the world since 1996, as the third American college team to play against Austria’s men’s national team in the game. Augustana College was defeated 7-0 by Austria in 2010 and the following year Rose-Hulman edged a thrilling clash 35-34.

The Austrians will use the game on Sunday, May 25 at the Hohe Warte Stadium in Vienna as their final preparation for hosting the European Championships of American football, which will be held in St Polten, Graz and Vienna from May 30 to June 7.

“This is a fantastic event that will present a strong challenge for the CMS Stags and a great spectacle for the Austrian fans who are passionate and knowledgeable about American football,” said Global Football President Patrick Steenberge. “Austria is a hotbed for the sport and a beautiful country that has some spectacular sights for the traveling group to enjoy during their stay.”

Head Coach Kyle Sweeney travels again with Global Football having been a member of the Team Stars & Stripes coaching staff at the Global Football-organized Tazón de Estrellas in Mexico. Sweeney also traveled to Ostia, Italy, on a Global Football tour when he was an assistant coach with Illinois Wesleyan.

Sweeney returned for his third year at the helm of Stag Football in 2013, posting a 3-6 record. In his first season, CMS finished third in the SCIAC and two of their three conferences losses were by six points or less. His second season required rebuilding as the Stags started 17 freshmen and sophomores each week.

Sweeney came to CMS after two years as the defensive coordinator at the University of Chicago. During those two years, Chicago enjoyed their best season since 1998 and back to back winning seasons for the first time since 2001. In 2010 Chicago won the University Athletic Association title outright.

“From a cultural aspect, the immersion we will have in two foreign countries will be fantastic and I can’t wait for our team to experience that,” said Coach Sweeney. “It is a part of the world many of our guys have never been to, so it will be a very unique experience. It is going to be amazing. Traveling together for close to two weeks and experiencing many new things is something I know they’re looking forward to and it will be a great bonding experience.”

Regarding the Austrian national team that will line up in opposition, Sweeney added: “I think they’re going to be pretty good. We saw film of some of the teams in their league and they’re really good. It will be a big challenge for us.”

The traveling CMS party will begin their European tour in the Czech Republic, visiting the old town and castle district of Prague before taking a river cruise. The Stags will practice at the Prague Lions facility before crossing the border into Austria to practice at the home of the Vienna Vikings. The group will enjoy a guided sightseeing tour of Vienna and will also visit the Schönbrunn Palace, Danube Tower and Prater Amusement Park.