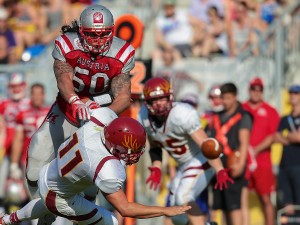 Claremont-Mudd-Scripps lost 21-14 to the Austrian National Team in a hard-fought Turkish Airlines Charity Bowl at the Hohe Warte Stadium in Vienna on Sunday.

The highlight of an overseas Claremont McKenna College spring tour from their home base in California to Austria and the Czech Republic with Global Football saw the Stags take on a strong Austrian team that is preparing to host the European Championships of American football, which will be held in St Polten, Graz and Vienna from May 30 to June 7. (Photo: Herbert Kratky)

The game was part of a unique ‘Super Global Sunday’ double-header as for the first time in 19 years of exporting American football around the world to 21 nations, Global Football had two teams playing simultaneously in two different European countries. While Claremont-Mudd-Scripps faced the Austrians, Southwestern University was taking on the Stuttgart Scorpions 420 miles away in neighboring Germany.

After the hosts had raced to a 14-0 lead and secured a seemingly insurmountable 21-7 advantage late in the game, the Stags refused to accept defeat and lost only when a Hail Mary pass on the game’s final play fell short.

Austria drew first blood and secured a 7-0 halftime lead as hometown Raiffeisen Vikings quarterback Christoph Gross threw a 4-yard touchdown pass to Thomas Haider of the Danube Dragons and Christopher Kappel of the Vikings tagged on the extra point.

On the first play of the second half, Austria doubled its lead when Felix Stadler of the Steelsharks Traun raced 37 yards for a touchdown and a 14-point advantage to delight the home crowd.

With the fourth quarter ticking down, the Stags moved the ball to the hosts’ 32 with 8:49 to play and a fourth down pass from Trey Reynolds to Tyler Stanek plus Matt Aven’s extra point put seven points on the board for CMS and fueled the belief that they could mount a late comeback.

Despite a failed onside kick, Spencer Drazocich recovered a fumble and CMS had the ball at the Austria 48 down 14-7 with 6:55 to play, but when trying a fake punt to move the ball, were stopped and the Austrians took full advantage. Gross produced a 35-yard pass to Vienna Vikings teammate Stefan Postel and earned a 21-7 lead.

Claremont-Mudd-Scripps refused to concede defeat and made three fourth down conversions, leading to a Nick Gott two-yard touchdown run to trail Austria 21-14 with 1:51 to play.

The resulting onside kick was recovered by Austria, but CMS got the ball back, trailing 21-14 inside the two-minute warning with 1:19 remaining and no timeouts available. Having moved the ball to the Austria 39-yard mark, the Stags attempted a desperate Hail Mary pass, which fell short to deny a spirited comeback attempt.