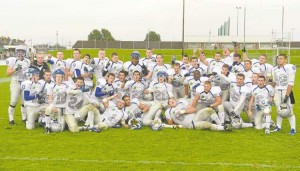 High schools, colleges and universities in Canada are being offered the opportunity to add a unique game to their 2014 schedule – a match up against another Canadian team in a spectacular setting across the Atlantic Ocean in Ireland.

The Global Ireland Football Tournament (GIFT) returns to the Emerald Isle in August 2014 in partnership with the Croke Park Classic and the Gaelic Athletic Association (GAA), having introduced top quality high school and college football played by Canadian and American rules to Ireland in 2012.

A unique opportunity exists for Canadian schools to become part of an exciting double-header to be played on Friday, August 30, at the GIFT event.  Two Canadian schools are already poised to announce their participation and event organizer Global Football is eager to add two more teams to showcase Canada’s style of football in Ireland.

“The field will be lined for Canadian rules football for all four teams to play either a regular season or exhibition game in front of an enthusiastic and curious home crowd,” said Global Football President Patrick Steenberge.  “In 2012 Villanova College from Ontario and Oak Park High School (pictured in Ireland) from Manitoba played at Pairc Tailteann, the home of the Meath Gaelic Athletic Association.  The locals loved having the Canadian players, coaches and families in town for a week and greeted them with wonderful hospitality before cheering them on in the game.”

The 2014 GIFT event will take place on the eve of the Croke Park Classic game between University of Central Florida and Penn State and all participants will have an opportunity to attend the high-profile college football game.  GIFT 2014 will again feature educational tours of various Dublin and County Meath sites for the participating student-athletes, practices at venues throughout the region, and interaction with local sports teams, leading to friendships that will last a lifetime.

The first GIFT event was declared an unprecedented success as more than 13,000 spectators flocked to three venues to enjoy the spectacle of high school and college American football teams, bands, cheerleaders and dancers in action in a special Dublin Friday Night Lights event.

Back home, the GIFT event generated media interest across Canada for the participating schools, including coverage in the Toronto Star, Winnipeg Free Press, Reuters, Canadian Presse, CanadaFootballChat.com and numerous local titles, in addition to more than 250 stories that promoted Canadian schools within Irish media outlets.