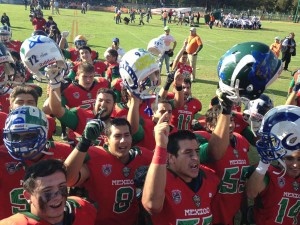 Quarterback Contla took advantage of consistent protection from his offensive line to throw four touchdowns and control the clock with some impressive drives that opened an unassailable 31-10 lead before the Americans scored late in the forth quarter.

Contla of UDLAP picked up the game MVP award after he completed 40 of 52 passing attempts for 352 yards and four touchdowns, with two going to CEM receiver Leopoldo Lara.

Josh Osborn (Central) led Team Stars & Stripes on the ground with 16 carries for 82 yards, while Donald Miller (Wartburg) had 6 receptions for 63 yards and Brendon Boerm (Central) 5 for 90 yards.

Having returned the opening kickoff to the Team Stars & Stripes 40-yard mark, the hosts marched quickly downfield, opening the scoring in the space of only three plays.

The CONADEIP hurry up offense caught the Americans off guard as quarterback Contla completed three passes, the third for a 20-yard touchdown to Lara and a Ricardo Flores extra point opened a 7-0 lead with less than two minutes played.

The Americans were soon back on the ropes as the Mexicans again ate up yards on offense, but turned the ball over on downs. That provided an opportunity to level the score that Team Stars & Stripes grasped. A perfectly disguised fake handoff set up a 62-yard pass over the middle from Pat Angle (Ohio Northern) to Boerm who had split the safeties and he raced almost untouched to the end zone.

Team Starts & Stripes opened the second quarter by going three and out and the punt team was called upon again after Joey Kropp (Lake Forest) had come up with an interception of Contla.

A 41-yard Flores field goal opened a 10-7 CONADEIP lead before a third three-and-out for the visitors.

Contla was masterful in controlling the offense and avoided sack, threw under pressure from far behind the line of scrimmage, and hit Jose Noriega, who managed to stay in bounds by the length of his toes for a spectacular gain to the opponent’s 28. Contla then hit Lara at the 10 before only the swatting hand of Marvin Carr (Elmhurst) prevented touchdown in the corner of the end zone

On the next play Contla again went to Lara for their second scoring combination of the afternoon and a 17-7 lead, this time over 9 yards.

Pat Angle (Ohio Northern) combined with to Donald Miller (Wartburg) for a big gain into CONADEIP territory and was continually forced to the air, as Team Stars & Stripes were unable to establish a rushing game.

A late 41-yard Kevin Sheldon (Central) field goal pulled the Americans to within one score, trailing by 17-10 at halftime.

The visitors needed to generate some early third quarter offense, but instead conceded two quick touchdowns, leaving them trailing by 31-10.

Following a three-and-out to open the half, Guillermo Villaboas reeled in a short 4-yard touchdown pass from the impressive Contla, who had moved the ball downfield at will.

Then Luis Ramirez came up with an interception close to the American red zone to set up another Contla pass to Jorge Retana from 12 yards out for the quarterback’s fourth scoring pass of the day.

Team Stars & Stripes finished the game on a high as Alex Latow (Cornell) came up with an interception and Aaron Eisler (Central) went to work with two quick passes to Dutch teammate Jack Norgaard, the second for a six-yard touchdown that reduced the deficit to 14 points.