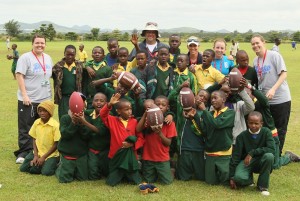 Global Football is delighted to congratulate John Roslien – a key member of ‘Team Global’ – on his deserved induction into the Mid-America Athletic Trainers’ Association Hall of Fame.

A veteran of Global Football initiatives for almost 20 years, John (pictured in hat) has been recognized by the MAATA for his devotion to athletic training. John’s career began as an Associate Professor at Central College in Pella, Iowa, where he now serves as the Athletic Training Program Director and Associate Professor, twenty-nine years later.

John, or ‘J.R.’ as his Team Global friends around the world know him, is a mainstay of the annual Tazón de Estrellas played in Mexico each December between a NCAA Division III college select team and the CONADEIP All-Stars from the host nation. John has served as Player Personnel Director for Team Stars & Stripes for all 17 years of the event, which was previously known as the Aztec Bowl, and works tirelessly to ensure head coaches nominate suitable graduating seniors for the roster.

“John has been a key person for our Global Football events for 18 years now, performing a myriad of roles prior to and during the events,” said Global Football President Patrick Steenberge. “His passion for education and for student athletes is mirrored by his commitment to whatever role he is performing at the time. Plus, he comes to work each day with a positive attitude mixed with humor and wit, which I really appreciate. JR is a totally unique individual whom I count on often. Congratulations!”

John wore multiple hats to ensure the Global Kilimanjaro Bowl became the first-ever game of college American football played on the African continent. His expertise and initiative transformed the Sheikh Amri Abeid Stadium in Arusha, Tanzania. Patrick Steenberge underlined John’s value in his book about the event, Tupande Kileleni: Let’s Climb to the Summit Together: 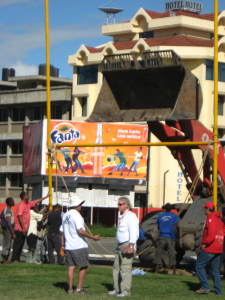 ‘JR’s role was broad and varied. He was to set up the game field, announce the game live in-stadium and assist with other tasks as needed. The field preparation alone was a monumental task, working with local people who had never seen an American football field or game in person or on television! One can imagine the scope of work that had to be done when you take into account that this was a grass soccer stadium with a cinder track around it as well as a cement curb. There were no goal posts, lines, announcer’s booth, TV booth or sound system when JR began his work. These efforts were likely not noticed by anyone except possibly the coaches and myself, thus allowing others to be the star players.’

In his tenure at Central, John also held the position of Head Athletic Trainer from 1986-2003. He currently serves as the liaison to the Wales Study Abroad Program and the college representative to the National Collegiate Athletic Association.

In addition to being a 2007 Iowa Athletic Training Society Hall of Honor Inductee, John has received the NATA Service Award, as well as the 2014 MAATA Award for Most Distinguished Athletic Trainer. As an active member of District 5, John has contributed on many levels, serving as the organization’s Vice President, Public Relations Chair, and Annual Meeting Exhibit Chair. Perhaps in no greater way have his contributions and influences had an impact as with his efforts and leadership as the MAATA Treasurer. John’s hard work has ever-positively changed the stability of the organization, establishing a strong financial foundation for the future.