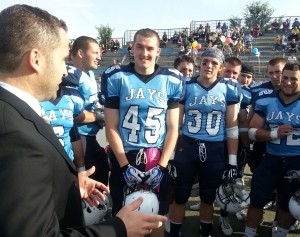 The Elmhurst College Bluejays eased to a 74-0 exhibition game win over Italian club team Legio Roma XIII to win the Roma Bowl and conclude a successful and enjoyable overseas visit with Global Football to Italy and Greece.

Under new head coach Joe Adam the Bluejays entertained the crowd of 1,190 fans at the Stadio Comunale di Fonte Nuova right from the opening kickoff, which was returned for a touchdown.

Despite the lopsided score in Sunday’s Roma Bowl, host club team Legio Roma XIII, under joint head coaches Fabio Annoscia and Marco Bozzarini, is a perfect example of a European club team that is eager to develop its players and talent level by welcoming American opposition to line up against on the gridiron.

Under clear blue skies, Elmhurst College were led by five rushing touchdowns from Andrew Tubek and one on the ground by Wesley Wagner and two interception returns to the end zone by Mark Evangelista.

The Mayor of Fonte Nuova attended the Roma Bowl, which featured cheerleaders, a marching band, a Fiat Classic Car Club rally and representatives of the U.S. Embassy in a memorable ceremony held before the game.

“The entire Roma Bowl event was a great experience for all concerned and we have to thank the Legio XIII team who do such a fantastic job in preparing for this event,” said Global Football President Patrick Steenberge.  “The Elmhurst College party had a memorable experience sightseeing and discovering new cultures in Greece and Italy before playing a valuable warm up game as they prepare for their new season.”

As part of their European visit with Global Football, the Bluejays took in the sights of Athens before boarding a cruise to the Ancient Roman city of Pompeii and then sightseeing in Rome.  The players and coached joined the Legio team for a joint practice and coaching clinic the day before they met in the exhibition game.