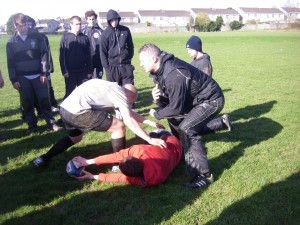 Fenwick Friars RFC from Oak Park, Illinois, continued their three-game overseas tour with a match against Galwegians RFC from Galway.

The high school student athletes have embarked on a rugby tour with Global Football featuring games against local school and club team opposition in Dublin, Galway and Limerick and an opportunity to explore Ireland’s spectacular countryside from March 21-30.

The morning of the tour’s second game was spent with Irish rugby coach Jimmy Duffy (pictured) of the Connacht Rugby Club as he conducted a clinic teaching some of the fundamentals and techniques of the game.

“The clinic alone was worth the price of coming on this tour from both the coaches’ and players’ standpoints,” said Bill Mahon, the president of the Fenwick Friars parents club and co-founder of the rugby program, who is coaching the backs during the overseas visit.  “The Fenwick coaches will be excited to implement these instructions as part of their new ‘Irish Program’ when we return home.”

During the clinic, Duffy worked on playing hard in the ruck, as well as the shape and continuity of the plays, which were aspects where the team felt they fell short during their opening game against St. Michaels College in Dublin.  The eager American students of the game learned quickly from his instruction, which was evident in their game against Galwegians.

The Friars took Duffy’s words to heart and their spacing and shape of attack had improved tremendously, but their overall inexperience, playing against a seasoned junior side, led to a defeat by the host Galwegians.

Senior Mike Hanrahan was graciously awarded a Galwegians jersey after the match as the Friars’ outstanding player.  Other noteworthy contributors included junior Tim Havenaar, with excellent tackles throughout, Danny Shannon, who stopped what could have been try-scoring breakaways, and senior Joe Matza, who played hard-nosed rugby but unfortunately was taken out of the game due to an ankle injury.

The Irish are well known for their hospitality and charm, which was evident after the game when the Friars were invited to the Galwegians clubhouse to meet the team.  Greg Costelloe, Director of the Youth Academy for Galwegians RFC, said: “We appreciate your coming all the way from America to play us.  You played a hard game against some of our provincial players during which you showed determination and great potential.”

Fenwick Friars RFC will face Old Crescent Rugby Football Club from Limerick on Saturday, March 29, at 10.30am at Rosbrien, Limerick in their final game of the tour will continue to enjoy many of the famous sights of Ireland before returning to Illinois on March 30.