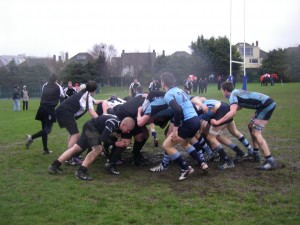 Two days after arriving in Ireland, Fenwick Friars RFC from Oak Park, Illinois, opened their three-game overseas tour with a match up against the prominent St. Michaels College club in Dublin.

The high school student athletes have embarked on a rugby tour with Global Football that will feature games against local school and club team opposition in Dublin, Galway and Limerick and an opportunity to explore Ireland’s spectacular countryside from March 21-30.

Fenwick started with a limited squad of 17 players with three starters still recovering from prior injuries and unable to play including senior fullback Mike Kelly, senior number eight Ryan Smith and junior prop Andy McGann.  Senior lock / jumper Jimmy Lawley also had to withdraw from the game as his already broken hand hindered his opportunities on the field.

As expected, in a match between one of Ireland’s foremost junior teams and an American club side still developing and learning the sport, St. Michaels dominated throughout, exhibiting their excellent skill and technique.  With development the name of the game, the score was not kept as the hosts scored several tries early in the contest.

The loss for the Friars was summed up by Director of Rugby at St. Michaels College, Andy Skehan, who spoke to the boys after the game and told them that while the Fenwick Friars Rugby Club has only been in existence for two years, St. Michaels College has had more than 50 years to perfect their rugby system to produce top rugby athletes.

Senior advisor to Fenwick Friars RFC Don McDermott said: “With the odds against them, the players never let their spirit down and fought hard to the finish.  We make no excuses for the loss.  We met a superior side, but we appreciate their hospitality and exquisite style of play.  The St. Michaels team was well organized and very well coached and games like this are why we came to Ireland as they will help make us better.”

The Friars had soaked up the principles and techniques of rugby the day prior to their meeting with St Michaels College during a four-hour coaching clinic at the University of Maynooth.  Eoin Hogan from the Irish Rugby Football Union and Dennis Bowes from NUI Maynooth mentored the American enthusiasts, who saw those techniques performed to perfection on the field by St. Michaels College.

The game, while being the most difficult match they have played during their club’s short history, in some of the worst weather conditions the boys have experienced, helped Fenwick Friars RFC mature in their understanding of the game and the culture of rugby.

Among the Fenwick Friars highlights, Aidan Maloney was fearless on the wing and made some great tackles, and Jim Wise played his first game at hooker yet succeeded in operating line-outs well as well as taking charge in the scrums.  Patrick Fitzgerald showed his desire to win, playing with a lot of heart and hustle, while showing the enduring brotherhood that rugby helps to create, former player Charlie Stein stood on the sidelines to support his team.  Stein played at Fenwick last year and having graduated is studying for his undergraduate degree in mathematics at Trinity College in Dublin.

Patrick Steenberge, President of tour organizers Global Football said: “Our boys fought extremely hard, but are just not at the same level yet in their careers.  I know they still will learn from this experience and it will help to make them much better players, as this was a great first hand look at how much they need to improve and at why the coaches tell them what they do.

“We often see a similar outcome when American football teams traveling to Europe with Global Football beat local opposition, but the players on the losing side relish the opportunity to face top-quality opposition and learn from the game as a result.”