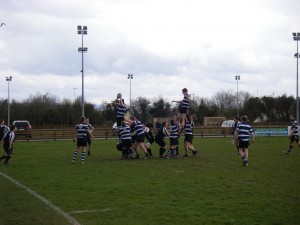 Fenwick Friars RFC from Oak Park, Illinois, wrapped up their three-game overseas tour with a match against Old Crescent RFC from Limerick and benefited from a third coaching clinic provided by the local club.

The high school student-athletes embarked on a rugby tour with Global Football featuring games against local school and club team opposition in Dublin, Galway and Limerick and an opportunity to explore Ireland’s spectacular countryside from March 21-30.

The Friars played their last game on Saturday against Old Crescent RFC near Limerick and displayed the skills they had worked on during three valuable clinics.  Friday’s third and final clinic at Glenstal Abbey featured coaches Andrew Brace of Munster Rugby and Aiden McNulty of Glenstal Abbey.  They worked with the American student-athletes on identifying and creating space on the pitch, being able to better analyze their opponent and react accordingly, as well as running a good line of support, which was noticeably better during the game against Old Crescent.

The game was played in three twenty-minute periods, as the entire purpose was to make it a friendly and instructional match.  Even with a short roster due to injuries, the Fenwick boys played hard together in front of several special spectators.

The game was watched by John Reddan, father of Eoin Reddan, a scrum half on all Ireland team, who arranged the game against Old Crescent; the parents of Fenwick anatomy teacher Michael Collins who came to support their son’s school during their tour around Ireland; and the aunt, uncle and cousin of former Fenwick student and friend to members of Fenwick Rugby, John Malone.  John, who graduated Fenwick in 2011, passed away last year on May 4, 2014 in a car accident returning from college in Indiana and the game against Old Crescent was dedicated to him.  Two of his good friends, Ryan Smith and Mike Hanrahan presented Malone’s relatives with Fenwick Friars RFC gifts and in return they presented the team with a shirt that included his basketball number.

After the match, Old Crescent invited the touring group to join them for a barbeque in their clubhouse, where the Old Crescent coaches told the Fenwick players how well they passed the ball in the game and that they were impressed with how quickly they could offload as well as with their strong tackling defense.  It was an immense improvement from the first game against St. Michaels and the Friars will be able to bring their improved game back to Chicago for their regular season.

The team traveled to the town of Trim in County Meath to attend a banquet dinner, where Coach Don McDermott presented his Ireland tour awards.  He recognized Bill Mahon and Billy Dunlap for their excellent coaching throughout the tour as well as in Chicago.  Allison Guinan was presented with a team parent award, as she took care of the needs of all the players throughout the tour.  Aidan Maloney was given special recognition for his performance as a back and Tim Havenaar was given special recognition as a forward.  The best forward award went to Jimmy Wise, while Mike Hanrahan was recognized as the most valuable player on tour as well as the playing best back.