Global Football has broadened the appeal of American football to 21 countries around the world since 1996, but the organization is also making its mark on home soil in the United States.

This summer, Global Football will host the Global Ireland Football Tournament in Dublin and partner with the Croke Park Classic as American football fever grips Ireland. A week later, as the NFL season kicks off in America, three standout football players who participated in initiatives run by Global Football will hope to make their mark with teams in the National Football League having signed as free agents.

Linebacker Kasim Edebali and Offensive Tackle Curtis Feigt both came from Germany to play high school American football as members of the Global Football-operated International Student Program (ISP), which ran for four years from 2006 to 2009. Edebali recently completed OTAs (organized team activity) with the New Orleans Saints, while Feigt made his impression with the Cincinnati Bengals.

Tackle Bryan Witzmann signed with the Houston Texans five years after he capped a successful high school career by traveling to Japan as a member of Team Stars & Stripes to play in the 2009 Global Challenge Bowl.

“The core mission of Global Football is to introduce student-athletes to new and exciting cultures, people and experiences, while broadening the appeal of American football around the world,” said Global Football President Patrick Steenberge. “Kasim and Curtis came to the United States having been identified by our coaching contacts in Germany as athletes who could further their football careers if given a chance and they have grasped that opportunity and are now living the dream.

“Bryan was part of a group of students recognized for their achievements both on and off the field, who were selected to travel to Japan with us, and it is wonderful to see him also playing at the highest level.

“This year Global Football organized spring tours for high school and college teams across Europe and in August we will host two Pennsylvania high school teams as part of our GIFT event being played in Dublin. It is exciting to think that young men from those teams might also realize goals of playing in the NFL.”

Edebali, who hails from Hamburg, Germany, came to the United States through the ISP in 2007, as one of 12 international prospects whose talents had shone at home and would be nurtured by playing high school football in the United States. 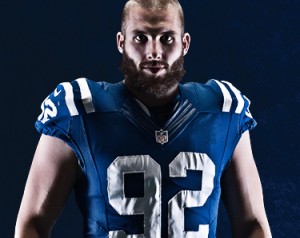 Among that group of ISP hopefuls was defensive end Bjoern Werner, who was selected in the first round of the NFL Draft by the Indianapolis Colts in 2013 following a stellar career at Florida State. Werner attended The Salisbury School in Connecticut as part of the ISP initiative.

Edebali impressed at Kimball Union Academy in New Hampshire for two years, before establishing himself with the Boston College Eagles, starting all 13 games in 2013, while leading the team in tackles for loss (15), sacks (9.5) and forced fumbles (3).

“I’m just ready to do a job,” said Edebali of his shot at a NFL roster spot. “At the end of the day, I just want the opportunity to play in the NFL, period. I had a dream to some day play in the NFL when I came to America through the ISP and now I have a chance to prove that I am good enough.”

Feigt graduated from the ISP and Mercersburg Academy in Pennsylvania and was recruited by the University of West Virginia, where he switched from the defensive side of the ball to the offensive live in 2011. The Berlin native started 19 games, was an All-Big 12 Conference Honorable Mention as a senior, and signed with the Cincinnati Bengals as a free agent this spring.

While a student at Somerset High School in Wisconsin, Witzmann traveled outside North America for the first time in 2009 with Team Stars & Stripes, a group of student-athletes selected to travel annually with Global Football. He lined up against the Japanese Junior National Team in Kawasaki, near Tokyo and tasted the Japanese culture while living with a host family. 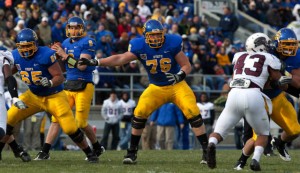 “The emotion of signing with a NFL team really didn’t really hit me until a few days after I got to Houston,” explained Witzmann. “It was a pretty big thing that I’d been working towards for months and when I realized it became more than a dream, it was overwhelming. Now I’m just excited to show what I can do.

“I have great memories of the visit to Japan. We lived with host families and I have stayed friends on Facebook with mine. It was interesting because the mom didn’t speak any English, the dad was pretty experienced with the language and the daughter was pretty decent with her English too, but the son spoke none. He had a machine that would translate words.”

Whether they come from Germany, or venture overseas from the United States, the student-athletes who participate in Global Football initiatives enjoy life-changing experiences and for some, those journeys might lead down a path to the NFL and a chance to play at the highest level of the sport they love.

About Global Football:
Since 1996 Global Football has provided amateur football players, coaches, families and fans the opportunity to travel and compete internationally with similar people of differing cultures. During that time they have produced games and tours in 21 countries on 6 continents, including the 2012 GIFT event staged in Ireland alongside the Notre Dame-Navy game. Through these games, clinics and tours the people involved experience and learn about unique lands, fascinating people, and the sports environment in different parts of the world. Global Football has become the world’s largest exporter and producer of American football outside of the USA. Contact Patrick Steenberge: Tel: 817-219-7274 / Email: Patrick@GlobalFootball.com

Global Ireland Football Tournament (GIFT) 2014 is sanctioned by the Pennsylvania Interscholastic Athletic Association (PIAA), USA Football and the International Federation of American Football (IFAF) and is a partner event of the Croke Park Classic. This event will feature Cedar Cliff High School (Harrisburg) vs. Penn Manor High School (Lancaster), in a rematch of their PIAA State Playoff game last November.