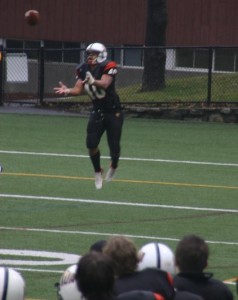 Kasim Edebali knows all about the drama and tension of the NFL Draft.

In 2013 the Boston College defensive end was sat alongside close friend and fellow German Bjoern Werner as the ACC Defensive Player of the Year waited nervously for his name to be called at Radio City Music Hall. That first round call came from the Indianapolis Colts who selected the Florida State standout with the 24th overall pick.

Now, a little more than 12 months later, Edebali will wait for his NFL Draft moment, albeit in less dramatic surroundings and without a feeling of nervousness.

“I’m going to be sitting in my college dorm room at Boston College with my friends,” said Edebali. “I’m not at all nervous. I’m more excited than anything. It’s other people really, who believe I’m nervous about how this plays out, but I’m not.

“Last year at the Draft, there were so many people there and I was there as a fan with Bjoern, but now it feels like a competition. We had five BC players who went to the Combine and we’re really proud of that and we support each other, but now we’re focused on when we might be drafted.”

Edebali and Werner share a connection far beyond both hailing from Germany.

While Werner was dominating defensively for his hometown Berlin Adler, 175 miles to the northwest in Hamburg, Edebali was making a similar impression with the Hamburg Huskies. The pair played as teammates on the German junior (under 19) national team in 2006 and then followed similar paths to the United States and ultimately the National Football League.

In 2007, both enrolled in the International Student Program (ISP), an initiative created and operated by Global Football, whose President Patrick Steenberge, a former University of Notre Dame quarterback, wanted to help international prospects live their dream of playing football in the United States. While Werner attended the Salisbury School in Connecticut, Edebali opted for Kimball Union Academy in New Hampshire. Those prep school foundations elevated both to successful college football careers, Werner at Florida State and Edebali at Boston College.

“We’ve been great friends ever since we started playing against each other and together for German in the Euros,” explained Edebali. “I knew he had applied to the ISP and that’s when I decided to do it as well. We stayed friends and kept talking through high school about our dreams of one day playing in the NFL. We’re genuinely mates.

“We were both in the ACC, so talked about the opponents were going against on the line and helped each other out like that. We went on vacation in Miami together a few weeks ago, and I’m not walking in there blind to the Draft or a NFL team because Bjoern has helped me understand what to expect.”

Funded for four years by the NFL Youth Football Fund and USA Football, the International Student Program no longer exists. Without the financial assistance to offset the cost of travel, prep school fees and board, neither Edebali nor Werner would have enjoyed the opportunities that have led them to the NFL.

Edebali was raised by his mother Nesrin, a single parent, and found the father figure that had always been absent from his life when he arrived at Kimball Union Academy in head coach John Lyons, who is now the defensive coordinator at the University of New Hampshire.

“He was a mentor, like a father to me and an advisor, and he was my biggest critic,” explained Edebali. “I would not be here without him. My English was not that good when I arrived at KU and coach Lyons helped me and got me through.

“I know that no matter what situation I’m in, I can call Coach Lyons. I had a couple of rough years at BC and I could always call him. I would like to be with him during the NFL Draft, but he’s up at UNH and I’m here at BC.”

Edebali’s mother, Nesrin, will be at home in Germany, simply expecting the best from her son, just as she always does.

“She still doesn’t really know what’s going on,” said Edebali with a smile. “She has been a real Mom. She tells me she loves me and no matter what I do, I’m going to be great and be the best. She takes the newspaper stories about me in Germany for granted and expects me to succeed. She came to three games, including my senior game at BC and it was a win over NC State and that was a highlight. I was a captain and my mom being there was pretty special.”

Nervous or not about his Draft destiny, Edebali has not considered which team might call his name, even if it might be the Colts, Giants and Patriots, who all boast Germans on their roster in Werner, Markus Kuhn and Sebastian Vollmer.

“I’m just ready to do a job,” he said. “At the end of the day, I just want the opportunity to play in the NFL, period. Teams are looking at my skill set and know what they’re getting if they pick me. They see how I would fit in their scheme, so wherever I go I’ll be happy just for the chance to play.”

Looking back on the humble beginnings of he and Werner in Hamburg and Berlin, Edebali summed up the unlikely journey from Europe to the United States and their sporting pursuit.

“Just two little kids from Germany playing in the ACC and then the NFL.”