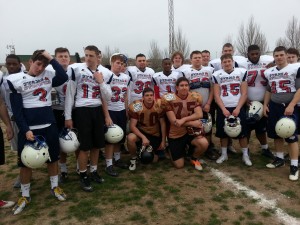 They have traveled from across the United States – from Arizona, Iowa, Ohio and Pennsylvania – to play football overseas in the unlikely but dramatic setting of Barcelona, Spain.

The annual Global Bowl series, featuring a traveling squad of high school student-athletes, sees Team Stars & Stripes take on a Cataluña representative team under head coach Bill Gallagher of Episcopal Academy in Pennsylvania.  On Saturday at 2pm in a Barcelona stadium just 100 yards from the beachside Olympic Village, the select roster of American players will realize their dream of playing football overseas.

“The team we brought to Spain is coming together nicely, as they boys are getting to know one another on and off the field,” said Gallagher.  “It is difficult to put in everything we need in such a short time, but the players are smart, eager to learn what we are installing.  Our coaching staff is doing a superb job.  Thanks to all the people who made it possible for these young men to have this experience.”

Adding an international flavor to the roster is Italian defensive back Simone Alinovi.  The promising youngster has impressed for his hometown Parma Panthers team and will line up in the Team Stars & Stripes secondary, hoping his performance will lead to an opportunity to play football in America.

Alinovi, who would like to enroll at a high school in Arizona, led the Panthers with 9 interceptions last season, returning one for a touchdown.  He returned 6 punts for 83 yards, 5 kickoffs for 138 yards and on the offensive side of the ball rushed twice for 11 yards.  The versatile Italian also handled kicking and punting duties and was Parma’s leading points scorer in 2013.

The Global Bowl series has been contested previously in Japan (2008 and 2009), France / Belgium (2010), Germany (2011) and Italy (2012 and 2013).  Team Stars & Stripes boasts an all-time 4-2 record, but it is the cultural experience and opportunity to enjoy the sights of Barcelona and the Catalan region that are as much a focus of the trip as time spent on the football field.

Running back / safety Riley Kordek of Germantown Academy said: “I am really happy now that I have studied Spanish for five years, and plan to major in the subject in college.  All day long I am translating for my teammates, in all kinds of situations, which is fun to do in order to help them.  Saturday will be amazing when we get to play against the Spanish team.  The food and everything else has been much better than I ever expected.”