Hanover College will travel to Ireland and Scotland in 2015 with the Panthers taking on Scotland’s top American football team the East Kilbride Pirates on Saturday, May 16.

The NCAA Div III Panthers from Indiana will face a Pirates team that posted an unbeaten 10-0 record during the British American Football League season and reached the semi finals of the playoffs under head coach Ross Templeton, who is also a member of the Great Britain national team coaching staff. The Pirates have been a staple of the Scottish gridiron scene for almost 30 years.

The Hanover College party will head to Scotland as an extension of a longer visit to Ireland and will take on the Pirates at their home ground of Hamilton Rugby Club on the outskirts of Glasgow. 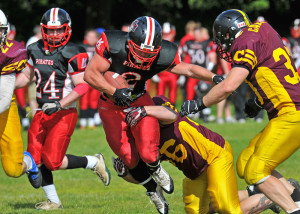 “We’re hugely looking forward to welcoming our visitors for what promises to be a really special event for everyone involved,” said Pirates Chairman Amanda McDonald. “This is a tremendous opportunity for our club, not only to challenge ourselves against Hanover, but to learn from them and to raise the profile of the sport in Scotland. We hope that it could pave the way for similar opportunities in the future.”

Hanover head coach Steve Baudendistel has been a member of the Panther coaching staff for ten seasons and led them to a second placed finish in the HCAC (Heartland College Athletic Conference) last season. He said: “I am very excited to be bringing the Hanover Panthers to Scotland for our game against the Pirates. The opportunity to visit Ireland and Scotland will be a great cultural and educational experience for our players, but also allows us to promote the game of football internationally. Our trip to Germany with Global Football five years ago was a great trip and I know this will be as well.”

Global Football President Patrick Steenberge added: “We are excited to bring a team from the United States to Scotland for the first time, adding to the 21 countries where we have previously helped spread the appeal of American football. Hanover College has traveled with us multiple times before and will be great opponents for the Pirates. I anticipate a wonderful visit, which will create great friendships.”

While in Ireland and Scotland, the traveling Hanover party will visit Dublin, St Patrick’s Cathedral, Croke Park Stadium, the GAA Museum, the Guinness Storehouse, the Titanic Belfast, Trim Castle, and take a ferry ride from Northern Ireland to Scotland.