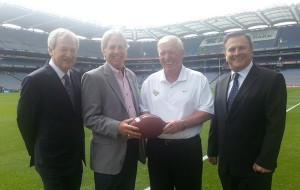 Global Football President Patrick Steenberge has returned from Dublin where he was among the guests present at the announcement of the 2014 Croke Park Classic, which will see the University of Central Florida (UCF) face Penn State in their 2014 Season opener in Ireland at the famous GAA stadium on August 30, 2014.

The GAA welcomed UCF coach George O’Leary and Penn State Director of Athletics Dave Joyner onto the pitch during half time of the Leinster Senior Football Championship Final between Dublin and Meath to officially launch the event.

Steenberge, whose company Global Football organized the Global Ireland Football Tournament 2012, featuring 12 American football high school teams from the United States and Canada kicking off their season in Ireland last summer, was among guests invited to take part in the announcement.

Steenberge joined the Penn State and UCF parties as they visited the Croke Park facilities, took an Etihad Skyline Tour of the stadium, and met with key stakeholders in the event including the Lord Mayor of Dublin Cllr. Oisin Quinn and officials from the office of the Minister for Tourism and Sport and Tourism Ireland, as well as Tourism Ireland, UCD and Trinity College.

“It was a unique and memorable weekend in Dublin, being able to spend time with Coach O’Leary, Dave Joyner, Paraic Duffy and all the others from Penn State, UCF and the GAA, and to plan ahead for this memorable event next August,” said Steenberge. “I worked closely with Penn State to produce their Football Fantasy Camp from 2006-10, and have many dear friends there. Every Nittany Lion fan should come to Ireland for the game and week’s activities!”

The Croke Park Classic will be the first time that UCF and Penn State have played outside the United States.  The last American Football game hosted in Croke Park was in 1996 when Notre Dame defeated Navy.  Both of these colleges were back in Dublin last year when they attracted a capacity attendance of almost 50,000 to their fixture.

“This is a hugely significant event for Croke Park and Ireland. We in the GAA are looking forward to hosting a competitive sporting occasion,” said Páraic Duffy GAA Director General.  “Irish people are renowned for their love of sport as evidenced by the thousands who attend our games throughout the year.  I have no doubt that this game will be every bit as attractive.”

Organizers of last year’s game in Dublin estimated that the game added €100m to the Irish economy as well as contributing to the nearly 15% growth in American visitors in the period August-October 2012 compared to the same three months in 2011.

Speaking at the announcement, Minister for Transport Tourism and Sport Leo Varadkar said: “This will be a fantastic event for Croke Park and for Ireland. The Navy vs. Notre Dame game in 2012 welcomed 35,000 US visitors to Dublin. The “Croke Park Classic” will be every bit as important, and just as exciting, and both teams are guaranteed a warm welcome. It’s great news for sports fans, for the GAA and the wider economy. I congratulate everyone involved on making this possible.”

Veteran UCF Knights Coach George O’Leary was a mentor of Penn State Nittany Lions coach Bill O’Brien at Georgia Tech (1995-2001). “We are very excited about the prospect of playing our 2014 season opener in Dublin,” said Knights Coach O’Leary, in Croke Park. “It’s a great opportunity for UCF, and a chance for us to grow the exposure of our football programme.”

“On a personal level, Coach O’Brien (Penn State) and myself are both of Irish heritage, so obviously it means a great deal to both of us to be in a position to bring our teams here. We are confident that Croke Park will be an excellent venue for us to play in, we have been hugely impressed to date with the facilities and we are looking forward to a huge crowd to get our 2014 season off to a flying start.”

Delegations from UCF and Penn State travelled over for the announcement on Saturday 17th, and both parties were hugely impressed not just with Croke Park stadium and its facilities, but also with their first experience of Gaelic Football.

“Our visit this weekend has only reinforced our reasons for wanting to come and play in Dublin,” said Dave Joyner, Penn State Director of Athletics. “We’ve not only grown our appreciation for the games so entrenched in the history and traditions here in Ireland, but have also confirmed that, because of the Irish people and their hospitality, Penn State fans are going to love their time here in late summer of 2014.”

The Croke Park Classic will take place on Saturday August 30, 2014 and Penn State and UCF alumni and fans can access travel packages including tickets through www.crokeparkclassic.com. A limited number of end zone tickets were released for sale in Ireland from ticketmaster.ie and tickets.ie in advance of a general ticket sale (for a capacity of 69,000) across all GAA outlets, scheduled for mid-autumn.