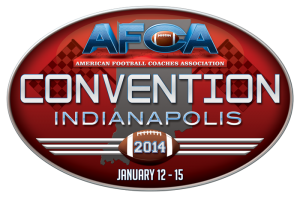 Global Football is again kicking off the New Year by featuring prominently at the 91st annual American Football Coaches Association Convention at the Indiana Convention Center in Indianapolis, IN, from January 12-15.

Patrick Steenberge, President of the Texas-based company that specializes in overseas football tours and staging international American football events, will be available to meet visitors to the Convention at Booth 1111 in the exhibit hall.

“I can tell coaches what a great opportunity this is for their football program and student-athletes if they travel overseas with us, but it is by talking to their peers and hearing about their experiences that will give coaches a true picture of what we offer,” said Steenberge.

“Many coaches who have enjoyed rewarding visits to different continents with us will be at the Global Football booth, so I invite coaches considering traveling to come and learn more from the people who have toured with us.  Football is growing around the world and there are an increasing number of countries whose teams are eager to face American opposition and provide warm and friendly hospitality during their visit.”

The AFCA Convention provides an opportunity for coaches considering taking their teams overseas a chance to talk to Global Football representatives and learn more about playing football against foreign opposition, while experiencing and learning firsthand about cultures, customs and history.  This will be the 16th year that Global Football has exhibited at the AFCA Convention.

On Sunday, January 12 from 5.30pm to 7pm, Global Football will host a reception for coaches interested in learning more about the annual Tázon de Estrellas (Bowl of the Stars) game played in Mexico in December between an all-star team of non-scholarship NCAA DIII college student athletes, Team Stars & Stripes, and the CONADEIP All-Stars from Mexico.  American and international coaches are invited to join the coaching staff that recently ventured to Monterrey led by head coach Don De Waard last month in the Indiana Room C-D at the Marriott Hotel Downtown Indianapolis.

Since 1996 Global Football has created and produced American football games and events in 20 different nations around the world and is in the process of organizing return tours in 2014 to Austria, Germany, Ireland, Italy, Mexico and Spain. For more information regarding Global Football tours and events, contact Patrick Steenberge: Tel: 817-219-7274 / Email: Patrick@GlobalFootball.com