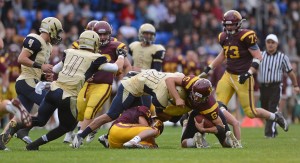 The Global Ireland Football Tournament – GIFT 2014 – will make a welcome return to Ireland next summer in partnership with the Croke Park Classic and the Gaelic Athletic Association (GAA).

Organized by Global Football, GIFT 2014 will again bring several top high school and youth American football teams from across the United States and Canada to venues in and around Dublin.  The visiting teams will play their first competitive game of the regular season overseas on Friday, August 30, 2014, the eve of the Croke Park Classic college football game between University of Central Florida and Penn State.

Global Football President Patrick Steenberge was the catalyst for the idea behind the Croke Park Classic and is serving as a consultant to the event for the GAA.

“The welcome we received from the people of Ireland and the many individuals and organizations who made the first GIFT event possible is in itself the perfect reason to return next August,” said Steenberge. “We have already received great interest from schools in North America wanting to kick off their seasons in Ireland and invite others to join them as we invite and identify teams to travel across the Atlantic.

“In 2014 we will have the added attraction of several teams which participate in a younger age group in the Pop Warner league system, to showcase another level of American football and also traveling groups of cheer and dance teams.”

The first GIFT event was declared an unprecedented success as more than 13,000 spectators flocked to three venues to enjoy the spectacle of high school and college American football teams, bands, cheerleaders and dancers in action in a special Dublin Friday Night Lights event.  Donnybrook Stadium and Parnell Park in Dublin, along with the Pairc Tailteann home of the Meath GAA hosted games in 2012.

GIFT 2014 will again feature educational tours of various Dublin and County Meath sites for the participating student-athletes, practices at venues throughout the region, and interaction with local sports teams leading to friendships that will last a lifetime.