A dream to play in the NFL that began in Germany and was nurtured in Connecticut and Florida will come true this week when German defensive end Bjoern Werner is selected in the 2013 NFL Draft. 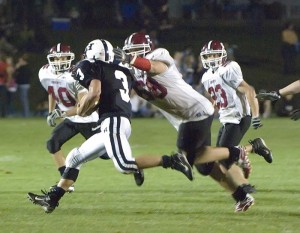 ACC Defensive Player of the Year Werner came to the United States through the International Student Program, an initiative created and operated by Global Football in 2006.  Having dominated for two years at the Salisbury School in Connecticut, the former star of his hometown Berlin Adler club team started as a true freshman, sophomore and junior at Florida State before forgoing his senior year, and now stands on the cusp of the NFL.

Accompanied by his family, Werner will attend the 2013 NFL Draft at Radio City Music Hall in New York City, hoping to be selected in the first round.

Global Football will post social media updates live from the NFL Draft following Werner’s night on Twitter @GlobalSportsGuy and @PRMikePreston and at www.Facebook.com/GlobalFootballLTD.

Read the NFL.com story of how Bjoern Werner came to the United States and watch a video of his success story here.

“His ability was evident from the moment you saw him walk onto the field, and it was matched by his humble demeanor and how grateful he was to be playing over here,” said Global Football President Patrick Steenberge.  “Our network of coaches in Europe had told us he would be the next Ritzmann and projected he had the ability to play at as a high a level as he liked and they were right. Now here he is on the brink of the NFL and he deserves it.”